Most Popular Leadership and Management

How The Sexes Differ On Diversity, Equity, & Inclusion 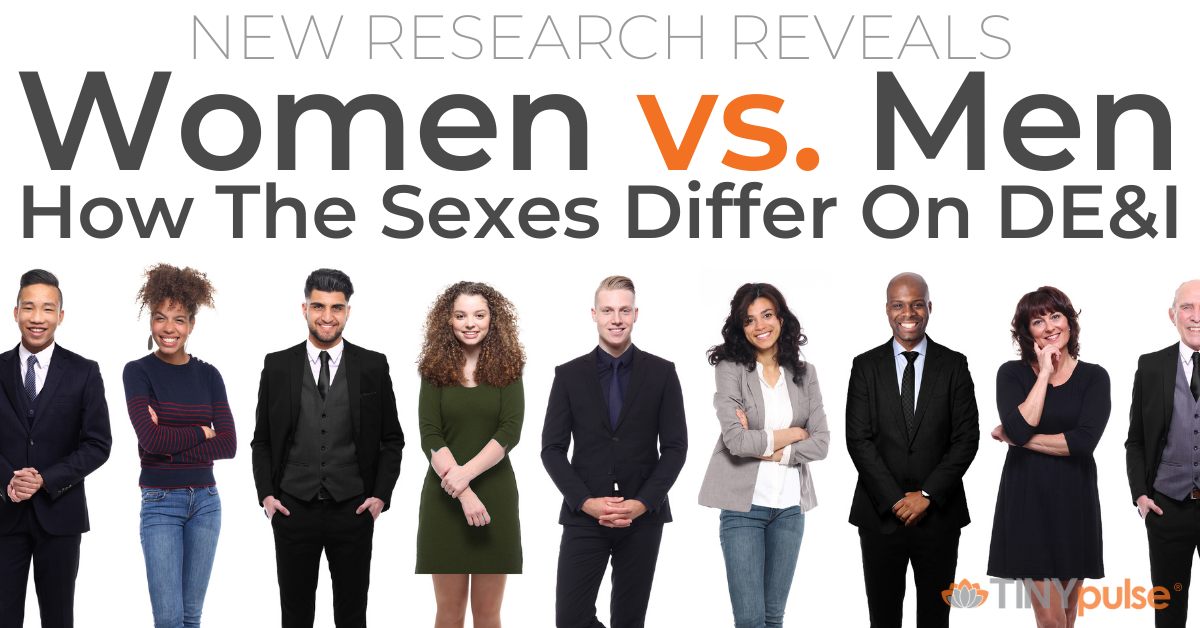 Diversity, Equity, and Inclusion (DE&I) efforts have really accelerated and taken off in recent years. In a 2021 survey of over 400 human resources managers, over 50% rated DE&I as a top priority for their organizations. Furthermore, our research surveyed over 1,000 employees corroborates this trend, and 73% of respondents shared that their organizations are committed to diversity.

At the same time, there’s still a tremendous amount of progress to be achieved since of the 10 quantitative questions in the research, women rated every single question lower - 10 out of 10 - than their male colleagues. Even more alarming, 67% more women than men reported feeling that their organization has a threatening work environment. Thus, not only is there substantial desire to improve on the DE&I front, but this is particularly true for women.

I. Three out of four employees believe their company is committed to diversity.

Overall, 73% of employees agree with the statement, “This organization is committed to having diverse employees well-distributed throughout the enterprise.” So nearly three out of four employees believe their company is committed to diversity, with 19% feeling neutral and only 9% disagreeing. This supermajority of employees indicates that organizations' current DE&I efforts are well-known among employees.

II. Most employees agreed that their organizational culture appreciates differences.

Out of the 10 survey items, the highest scored statement with 79% agreeing was, “This organization has a culture in which employees appreciate the difference that people bring to the workplace.” This is very encouraging to see, especially when 17% of the respondents were neutral and only 5% disagreed. High appreciation for differences within organizations can provide a promising foundation for building positive changes in DE&I.

III. Employees are less likely to agree diversity awareness is a priority in their organization.

On the flip side, the statement with the lowest agreement showed that only 66% agreed that “Promoting diversity awareness is a priority of this organization.” Neutral responses registered 23% of the time with disagree coming in at 12%. Not only was this the lowest scoring statement, but it also had the highest percentage of neutral responses at 23% of all 10 survey questions.

IV. Women rated their companies’ DE&I efforts lower than men in 10 out of 10 questions.

The survey found women consistently rated their companies’ DE&I efforts lower than their male counterparts on 10 out of 10 questions. In fact, 67% more women reported feeling that their organization has a threatening work environment compared to men. This indicates that there is a larger number of women who feel that their work environment does not allow them to feel safe in expressing themselves.

Women Provide Significantly More Feedback on How to Improve Their Organization’s Diversity, Equity, and Inclusion

A female employee suggested, “Hard to narrow to one thing, but hiring and promoting diverse employees/managers will be important to including those voices in all conversations.”

Furthermore, men provided an astounding 573% more “unsure” responses compared to women when asked how to improve DE&I. Once again, it’s very positive to see that only 3% of women shared that they were unsure of how to improve their company’s diversity, equity, and inclusion.

An example of an unsure response from a male employee was, “I currently don't have any ideas here.”

Top Dozen Themes from the Suggestions

Categorizing the feedback yielded 12 main themes led by Selection and Voice. Selection refers to suggestions on recruiting and hiring more diverse employees. The voice theme includes suggestions on giving employees opportunities to give their opinions. Both of these themes were cited almost at an equal volume for both men and women. But then some differences appear. Analyzing the verbatim suggestions further revealed: 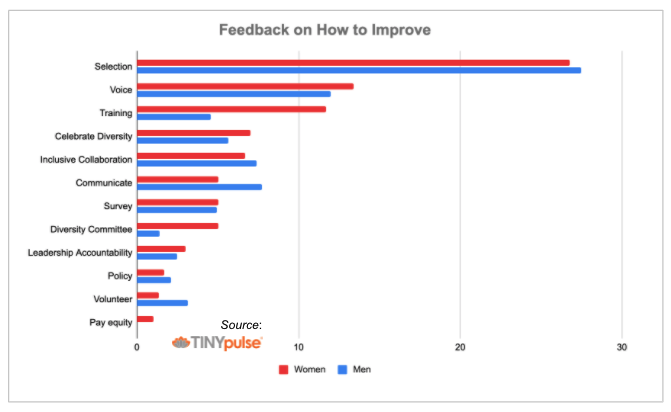 Diversity, Equity, and Inclusion initiatives are most successful when they are supported by employees and should be implemented as a holistic system rather than by piecemeal programs and policies. According to Dr. Brooks Holtom, a professor of management at Georgetown University, “Such a program could include a range of approaches such as targeted training to different audiences, revising hiring practices, normalizing flex time, and using technology and behavioral science to reduce bias in performance management processes. Also, carefully collecting and reviewing data will let you know how your programs and policies are performing, so you can make adjustments.” Based on the qualitative data, these are the initiatives that were suggested most often by employees. We have also included some best practices for each initiative.

Policies around diversity and selection should be fair and transparent. Employees are most likely to be supportive of when a numerical analysis shows that a lower proportion of minority employees are being hired compared to the majority. The organizational selection strategies that receive the most support from employees involve enhancing recruitment of diverse applicants and removing barriers for diverse applicants (Harrison et al., 2006).

Human resources and managers should survey employees to determine which diversity initiatives would garner the most support from employees. Surveys, feedback, and diversity committees provide voice for employees. To give equal voice to women, diversity committees should be comprised of at least 50% women. In addition to listening to diverse voices, organizations and managers should communicate openly about their DE&I practices.+

Diversity training can lead to positive changes in thinking and skills needed for interacting with diverse employees. Diversity training is most effective when it is interactive with exercises and discussions (Kalinoski et al.,2013). Following diversity training, organizations should examine training effectiveness by measuring trainees’ attitudes, reactions, and knowledge related to the training.

Promote multiculturalism through inclusive collaboration and celebration of diversity. Managers who would like to implement these practices can host events recognizing different cultures while encouraging comradery. According to past research, encouraging multuiculturalism leads to a a reduction in stereotypes and discrimination (Bono, Kim & Beaver, 2020).

For example, Lever certainly focuses on DE&I. In the past year alone, Annie Lin, VP of People has implemented the following initiatives:

At the end of the day, it’s okay to feel uncomfortable talking about DE&I. Yet nobody should rest easy until the workplace is fair and equal for everyone — and it’s going to take a lot of work to get to that point.

The key takeaway from this DE&I study is that there is a massive perception gap between men and women on diversity, equity, and inclusion, and that’s a challenge that needs to be resolved in the workplace.

Of course, gender is a substantial lens to view DE&I efforts at work, and an extremely important one. Building on this study, the TINYpulse team will focus on how race impacts an employee assessment of their company’s DE&I efforts. Finally, never forget that a willingness to be uncomfortable is often the first step to long-lasting change.

Over 1000 employees from 18 different organizations were surveyed through their organization's use of the TINYpulse DE&I survey.  The gender of 942 employees was available and used for analysis. All organizations included in the sample requested responses from their employees between July 2020 and December 2020.

Employees indicated their level of satisfaction with DE&I in their organization through a ten-question survey. The questions covered inclusivity, cultural appreciation, employee voice and other important markers of DE&I. In addition, we analyzed qualitative data from an open-ended response that asked employees how DE&I could be improved in their organization. We examined all of these results by comparing men's responses and women's responses to determine the gender differences in perceptions of DE&I.

David Niu is the Founder of TINYpulse, a company that helps hundreds of organizations, like Microsoft, County of San Mateo, and Capital One get a pulse on how happy, frustrated, and burnt out their people are before retention sinks and issues fester. He is a frequent contributor to Entrepreneur and the Harvard Business Review, where he writes on leadership and culture. 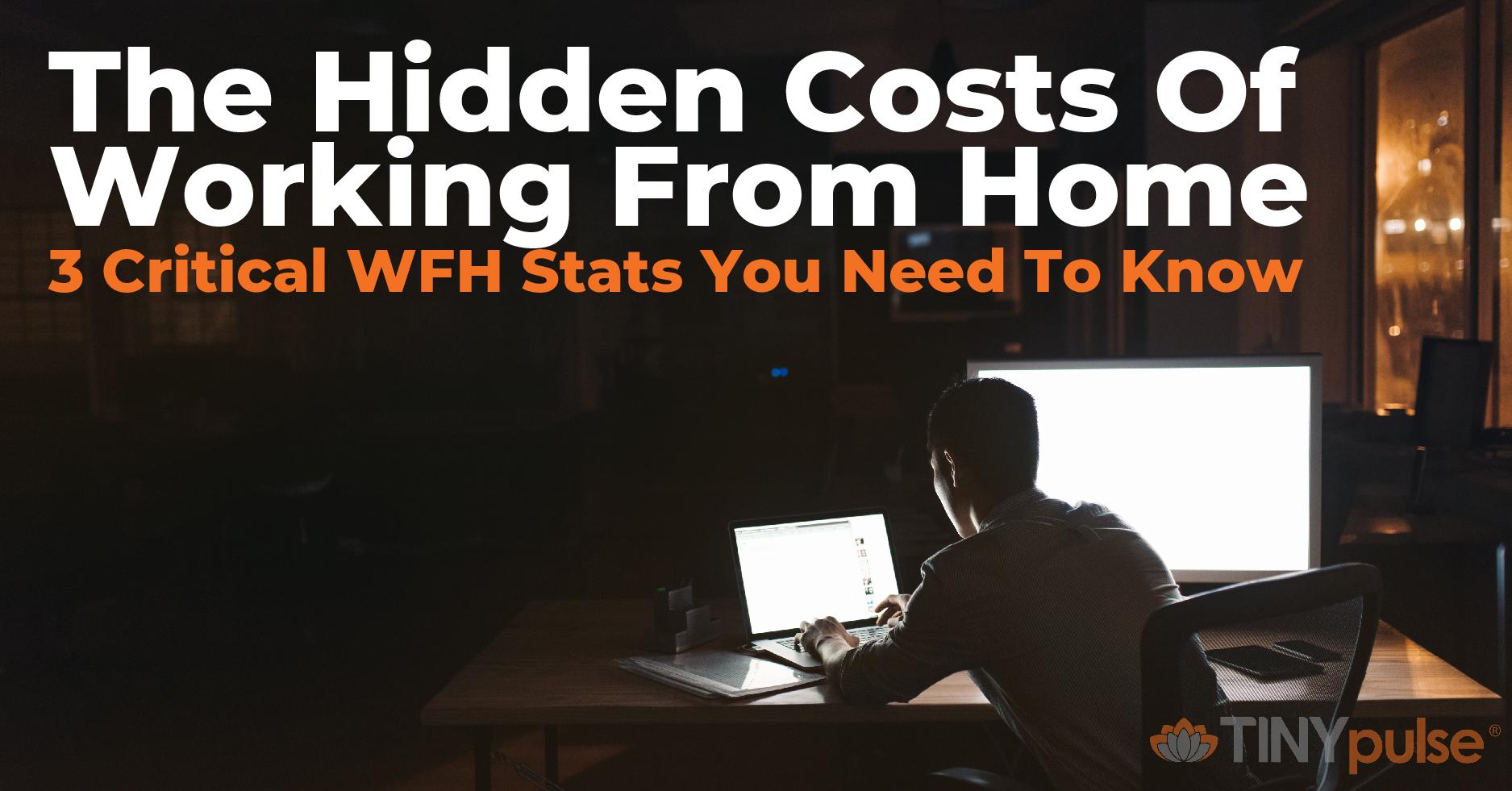 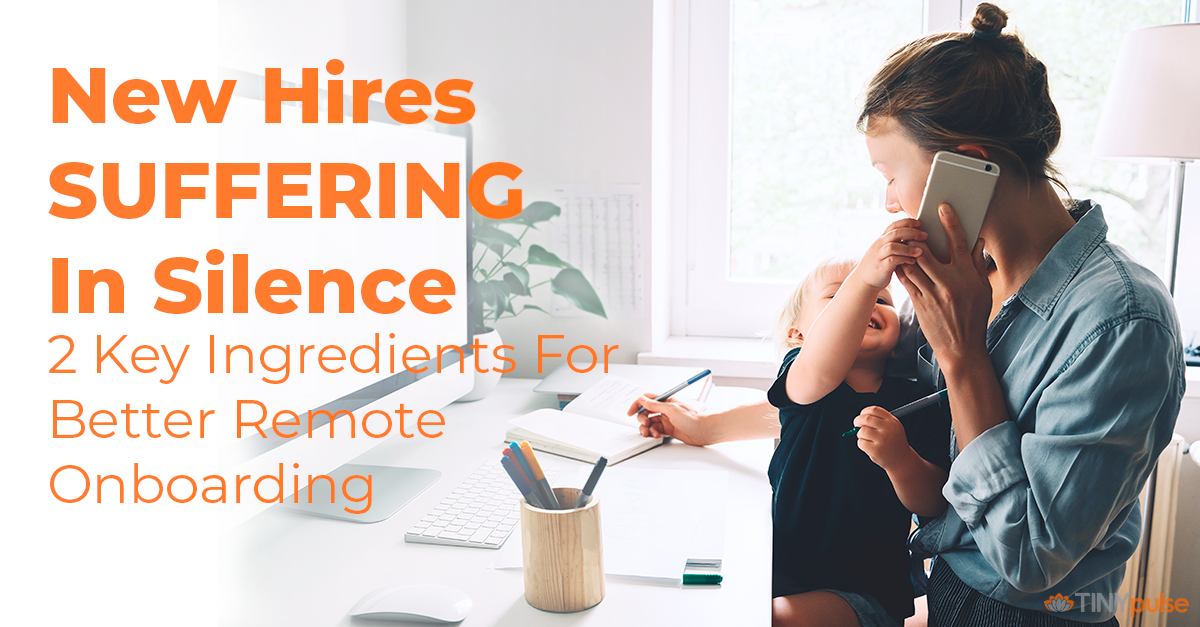 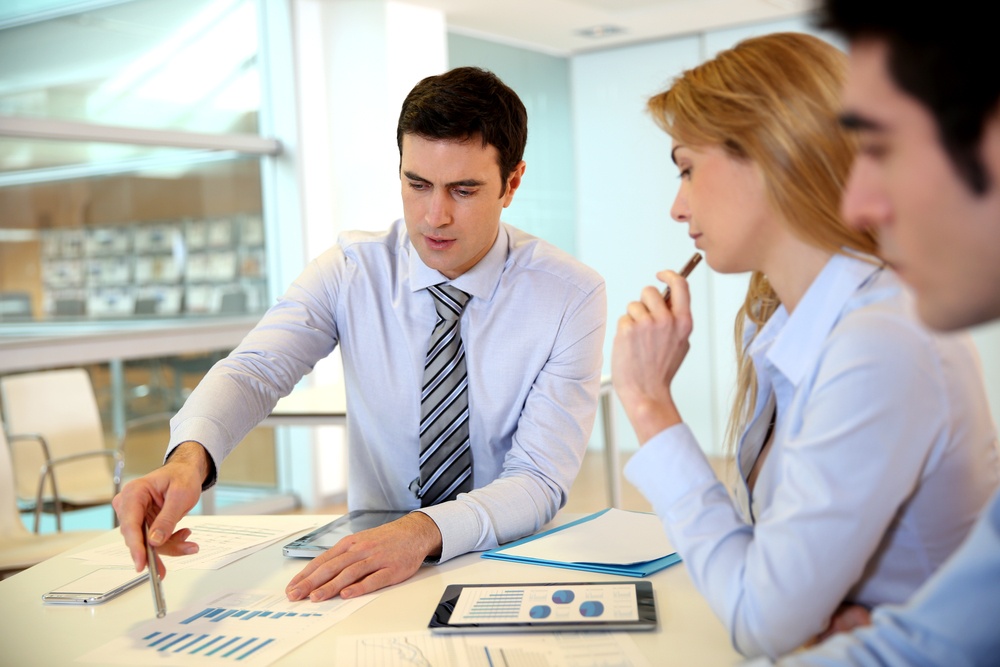