Are You Happy At Work? Bosses Push Weekly Polls 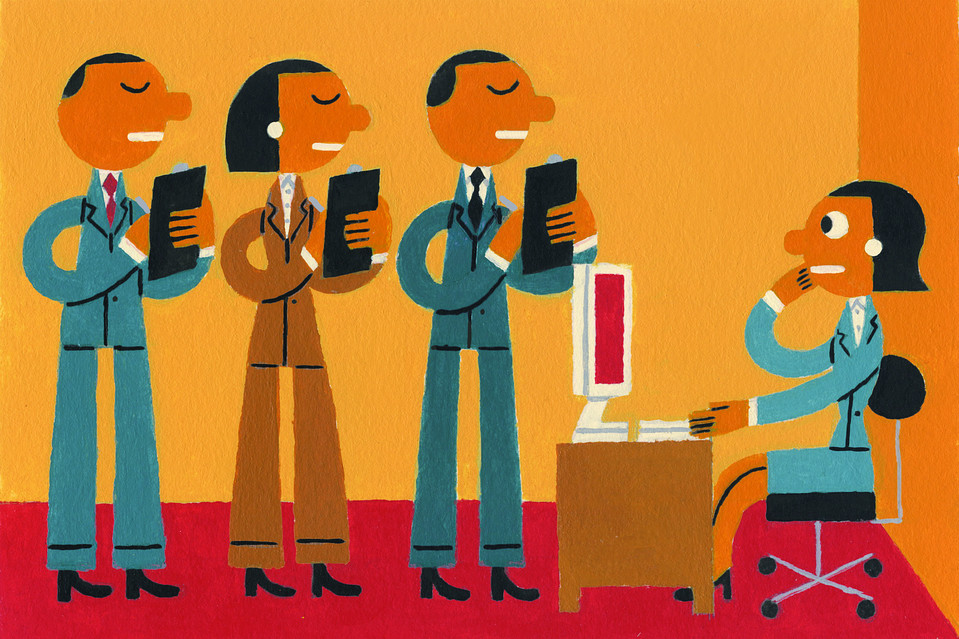 Here are some things Rebecca Joyner ’s bosses at Metis Communications have wondered lately: Does she feel that managers listen to her? (Yes.) What are you proud of accomplishing last week? (Helping pitch a marketing project.) Did she have an embarrassing haircut as a kid? (A bad perm, 1987.)

Questions such as these appear three times weekly on the computer screens of Ms. Joyner and her co-workers at the Boston communications firm. For them and many other U.S. workers, constant, quick-fire polls have become a feature of office life.

In the era of status updates and instant feedback, so-called “pulse surveys” are now catching on at work. Employers say short monthly, weekly or daily polls—sometimes a single question at a time—provide data on how their teams actually feel and catch problems before they fester. Frequent surveys are even replacing annual employee surveys at some companies, bosses say, although other companies, such as Google Inc., use both.

The trend is part of a larger shift toward data-driven work in which managers are expected to use data to make decisions large and small, from broad corporate strategy to which toppings to choose for an office pizza party. Mobile apps and faster analytics have put sophisticated polling tools within reach of even small firms.

The companies may pay about $50 a month or anywhere from $15 to $100 per employee for pulse-survey tools, administered by new firms such as TinyPulse, 15Five, BlackbookHR and Niko Niko, as well as established survey companies like Gallup.

WHAT DO YOU THINK?

Some 80% of firms have conducted a survey to gauge how employees are feeling, according to data from the Society for Human Resource Management. While most of those surveys are still annual, workers and managers appear to be growing disenchanted with long, yearly questionnaires. A 2011 study of European employers by human-resources consulting firm Aon Hewitt found that fewer than one-fifth of workers believed their survey responses would result in action.

It’s not clear either whether short polls lead to big changes, though managers claim that asking employees to choose between “Prince or Michael Jackson?” boosts camaraderie, and workers say they like getting to raise concerns without risking their careers.

Metis’s Ms. Joyner says snap polls have sparked conversation and some action. Within two weeks of a survey asking whether employees were happy with their office chairs, a couple of standing desks appeared at the office, she says.

The weekly surveys have turned up some surprises for Mr. Albrecht. He found, for instance, that the happiness of the firm’s large remote workforce was lower than the happiness of workers at headquarters and that it decreased during the firm’s busiest seasons, such as open-enrollment periods.

Mr. Albrecht assigned extra support to ensure that remote workers weren’t left in the lurch and invested in more teleconferencing tools to “reconnect [remote workers] with the mother ship,” he says.

At Vodori Inc., a digital marketing agency in Chicago, employees sound off a few times weekly. Recent poll questions have included “are there things you don’t know about the company that you feel you should know?” (The firm also uses the survey tool knowyourcompany.com.)

“It’s sometimes a little bit scary. Do I really want to know the answer to this?” says Mr. Gochnauer.

‘[A survey] is a conversation starter. It’s not the end all and be all.’

—Eean Crawford, a professor at the University of Iowa’s Tippie College of Business

Other businesses are using surveys to examine how workers’ moods affect sales and productivity.

Last year, Sears Holdings Corp. started an effort, dubbed Project MoodRing, to record store employees’ moods at the end of their shifts. Workers choose a color-coded emoticon on a screen to describe how they are feeling, from “unstoppable” or “so-so” to “exhausted” and “frustrated.” Sears estimates it will receive about 28 million daily mood responses a year.

The anonymized feedback gives management a snapshot of workers’ moods across the company’s stores at any given time. The retailer is trying to quantify whether employee happiness varies by region or time and whether employee moods correlate with sales and customer satisfaction.

So far, Sears has found a correlation between slightly higher sales and customer satisfaction at stores where employees are in positive moods rather than neutral or negative moods, according to a corporate presentation about the program. The retailer is also studying whether managers can take action, such as sending out short emails praising employees, to boost mood. A Sears spokesman declined to comment further.

Too many questions from the company may give workers polling fatigue, says Eean Crawford, a professor who studies employee engagement at the University of Iowa’s Tippie College of Business. And employees may grow disillusioned if their rapid-fire feedback doesn’t get a timely response, Dr. Crawford cautions.

A survey, he says, “is a conversation starter. It’s not the end all and be all.”

New York product-development company Quirky Inc. asks employees a few short questions each week—such as “What are the challenges you are facing?” and “Who has demonstrated great leadership this week?”—using a tool from 15Five.

“Without some kind of variation it can get a little bit like homework for some people,” Ms. DiRe says.