Why Do Workers Feel So Unhappy?

Reprinted from the original The Atlantic article by Bourre Lam 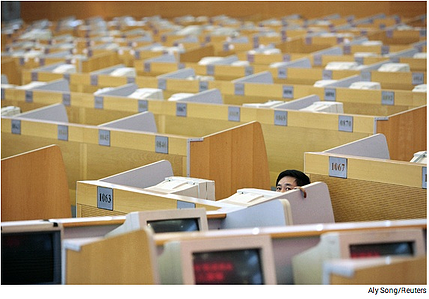 Being unhappy at work is such a cliché, and unfortunately for companies it also looks like an expensive one. Research on worker happiness has linked it to 12 percent more productivity, and businesses with happy employees beat their peers by 3.8 percent in the stock market. A Gallup report tallies up the cost of unhappy, disengaged employees to the U.S. economy at $350 billion annually due to lost productivity.

More and more companies have tried to combat employee doldrums with perks, such as the famous Google fresh juice bar or Airbnb's annual $2,000 handoutfor employees to travel the world. Then there's Zappos' weed-them-out approach(recently copied by Amazon): give employees a cash incentive to leave just in case they're not happy, and rush them out of the building before they get trained and become a disgruntle employee. But do any of these maneuvers work? How can companies know how their employees are doing?

One startup is looking to help companies fight employee unhappiness with better data. TINYpulse uses anonymity and simplicity to zero in on company problems: Weekly, a one-question survey is sent out to assess how workers feel about anything from compensation to the condition of the bathrooms.

David Niu, TINYpulse's founder, says that his clients—500 companies including HubSpot, AAA, GlaxoSmithKline, and PayPal—are trying to avoid the ill effects of unhappy workers, such as talent drain and diminished productivity. “Regardless of geography, size, industry—one of the most haunting experience for CEOs is when their best employee says here’s my two weeks," says Niu.

With all those "tiny" surveys, TINYpulse has a fascinating vantage point into the psychology and well-being of the workforce, something it is showcasing in a new report compiled from 200,000 anonymous responses the surveys have received.

Here are some highlights: 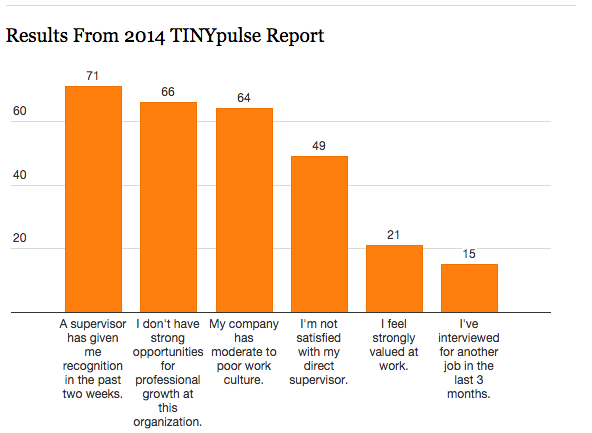 That's right: Just one-fifth of employees report feeling strongly valued at work.For employers, the last bar on the graph is the stat that will be particularly disconcerting, given that the cost of replacing an employee costs about 20 percent of a position's annual salary.

According to Gallup, the U.S. and Canada are already top in the world for employees who are psychologically committed to their work at a dismal 29 percent. Western Europe comes in at 14 percent engaged and East Asia is dead last at 6 percent.

Of course, while the bottom line may be the motivating factor, it's heartening to see employers prioritize worker well-being. For a country that spends more hours working than sleeping, the benefits of feeling happy at work are potentially huge.