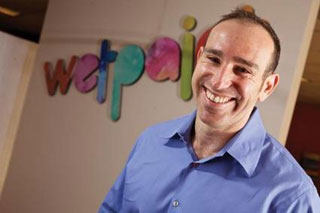 Every now and then, I get fired up and inspired by someone I’m interviewing. Ben Elowitz of Wetpaint falls into this category. Ben started Wetpaint in 2005 with seven other people, and he freely encouraged all of them to think of themselves as co-founders.

At first, Wetpaint’s goal was helping people create all types of content online as the whole world was going social. Now, at forty-five employees, Wetpaint is focused on how people are distributing their entertainment and celebrity news via Twitter, Facebook, and the like. Ben Elowitz categorizes Wetpaint as a next-generation web publisher, like People or Entertainment Weekly (Wetpaint was recently acquired by Viggle, over a year after this interview was conducted).

When I spoke with Ben, they were doing operating and financial planning in November and December. They also performed a mid-year checkup, gauging initiative performance, new lessons, and necessary changes. As systemic as this may sound, they are definitely not afraid to switch things up outside of these cycles.

To keep himself accountable, Ben’s board of directors helps him examine the facts. They also host a two-day board offsite to become realigned every year, which Ben finds amazingly helpful. Now that the company is firing on all cylinders, they hold less frequent, less intensive board meetings.

Ben is very introspective when it comes to best practices around people management, leadership, and culture. The following are his experiences around these issues.

For his four direct reports, Ben conducts weekly 1-on-1 meetings. Everyone has a list of the top five things they’re working on, as well as things they need from him. Feedback is exchanged both ways. Ben finds that this process keeps everyone focused and accountable.

Ben thinks that performance reviews are “important, life-changing, inspiring, lots of work, and hard to teach.” Most employers don’t share this enthusiasm, so I was immediately eager to learn more. In his view, the goal of performance reviews should be to quickly move people very far forward in their careers. Reviews can, in his view, serve as a valuable once-a-year opportunity to inspire and tell people how far they can go, not just in work, but in their lives. Ben’s best managers always made sure he was getting better and better every year, and he strives to do the same for those that work with him.

At the same time, he hopes that the reviewees think of the annual review as he does. He concedes that regardless of how much he evangelizes progress around reviews, people probably still fear and dread them.

Ben likes separating these two discussions because most of the time the reviewee fixates on “the number” of the compensation review. In Ben’s mind, reviews should be 70 percent professional development and personal growth and only 30 percent performance assessment.

Wetpaint invests in teaching managers how to better conduct reviews. They focus on positioning the review as a true opportunity to improve the professional development of the team. He feels that if he doesn’t train his managers, they’ll simply fill out a form and be done with it.

Ben believes ardently that nothing should come as a surprise in a review. Feedback should be provided on a rolling basis, not saved for later.

During 360s, if someone gives a peer or manager all fives, Ben will send the form back. He’ll remind them that this process is about helping people become better, and that they need thoughtful feedback on improvement. Only honest, critical feedback moves people forward.

Ben was so genuine during the interview, and I believe in his well-meaning intentions to dig deeper for constructive feedback. Every reviewer and reviewee needs to keep in mind that it’s easy to just fill out some forms, but it’s much harder to uncover true opportunities for improvement. Those prospects are gifts that management can provide, as long as a plan to address those opportunities is created along with the employee.

Ben’s accountable for four annual reviews. He spends four to six hours on each. He starts by dividing a sheet of paper into four quadrants:

Then he fills out each quadrant with a bulleted list. He also considers the input he receives from 360 reviews (each person has three) and the reviewee’s own self-assessment. He analyzes this and then lists, at the top center of the sheet, three top priorities for feedback during the meeting. He calls this his “MIT” for “most important thing.” Otherwise, giving feedback on everything is too paralyzing, especially if there are forty or fifty bullets to go through. Ben admits that this is thorough, but he wonders if it is too thorough.

Ben shared many nuggets and tips on conducting performance reviews, but most refreshing was his philosophy that reviews are a formal once-a-year opportunity to inspire and move people as far and as quickly as possible at Wetpaint and even beyond as individuals.

I’m a big believer that we have a choice when faced with any situation. We can have a positive, neutral, or negative attitude, like “Today’s going to be a great day!” or “Work’s going to suck today.” And to some extent we do attract what we think. The kicker: the mindset we choose is free, so why not be positive or at least neutral?

Even though he admits it’s hard and takes him up to six hours per review, Ben adopts a mentality of “important, life-changing, and inspiring,” a good reminder of the opportunity and obligation all entrepreneurs and managers possess.