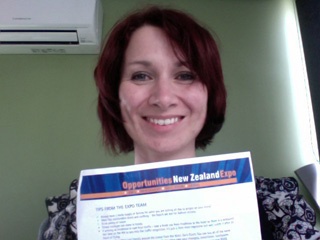 WORKING IN: Paddling their Own Canoe to Success

Scott and Hayley Roberts were working at competing marketing companies in London when they met at a business conference in Hong Kong. By the time they started dating, Scott had become increasingly disenchanted with the strangling routine of his day job. One night, while watching a documentary on the wealthiest people in the UK, Scott was jolted with inspiration when one of the billionaires being interviewed advised viewers to “paddle your own canoe if you want to get rich.” At that moment, Scott realized that he wasn’t going to earn real wealth as an employee. He knew he had to start his own business. Meanwhile, Hayley had hit a wall in her own job. She’d risen up the ranks, yet even with her ideas and energy, she now had nowhere to go within the organization.

Scott wanted to return to New Zealand, and Hayley was keen to try working there. They hit upon the right idea at the right time: a magazine for employers to lure skilled Kiwi labor back home from overseas. The couple took a two-week “vacation” to New Zealand to gauge interest, and employers jumped at the opportunity to advertise. Upon returning to London, they quit their jobs and started Working In in 1998.

Today, Working In employs thirty-seven people in New Zealand and overseas, with additional offices in Sydney, London, Johannesburg, and Brazil. It provides an online marketplace for international candidates to meet potential employers in a destination country, and permits employers to search globally for talent. The company also hosts more than ten employment expos around the world annually.

Most of the employers that use these services are in the engineering, mining, and natural resource industries, with typical salaries starting in the six-figure range.

Scott and Hayley acknowledge having felt growing pains a few years back, when the global recession closed a heavy door on their clients’ recruitment costs and international travel budgets. Working In had been growing aggressively, “charging ahead way too fast to stop immediately,” Hayley admits. Rather than let this financial hiccup stop their plans, they formalized their strategic planning and brought in outside investment. To align the goals of the company’s founders and investors, Scott and Hayley disciplined themselves to create an operational plan, brought in an HR manager when the company hit around twenty-five hires, and scaled back on the number of expos. The company is now back on track to grow at a healthy clip.

Drawing on the wisdom from fourteen successful years, they relayed the following insights for other entrepreneurs to learn from.

Separate Performance and Compensation Reviews Scott believes that performance reviews shouldn’t be clouded by money. Everyone should be able to talk freely and discuss where they want to go in their careers.

Separating a performance review from one for salary upgrades provides an opportunity to hold a frank discussion without the pressure of pay looming over anyone’s head. Additionally, it affords the managers time to implement whatever structure is required to elevate that employee to his or her next level in pay.

Working In conducted 360-degree peer reviews in the past. In HR lingo, “360” reviews are a popular employee development tool: peers provide feedback to one another, and to their employers. The staff was at first skeptical and nervous, but then they all submitted glowing feedback about one another that didn’t provide much value to the founders—but it did create more paperwork.

Make the Right Hire the First Time Hayley shared that Working In screens new hires for a positive attitude, because with the right mindset they can easily train people in the needed skills. But the opposite doesn’t work for them. For key positions at the company, Scott would forsake growth and profitability to wait until the very best person could fill the role. How many of us have hired someone less than perfect because we desperately needed someone in that seat—and came to regret that hasty decision later?

Their first in-person interview is only twenty minutes, and like with “speed dating,” the founders know very quickly if they click with the person. If there’s good chemistry, then the candidate comes back for a longer second interview.

For most of my interviews, I start with an online exercise that evaluates if candidates can follow directions and perform under a time constraint. Then my first interview takes usually forty-five to sixty minutes. I think the twenty minute “speed dating” makes a lot of sense either on the phone or in person to quickly ascertain fit.

After the second interview, Working In leverages ASSESS as their personality test for candidates and how they may fit in a particular role. Scott thinks this isn’t as easy to interpret as the DISC system of testing people’s personalities, but he really likes it for people in sales roles. Hayley agrees that DISC has a wider reach, and is more applicable especially for team dynamics and how to deal with one another.

Working In participates in an annual survey conducted through the Kenexa Best Workplaces program, which accrues anonymous employee feedback on eighty-six areas of management.

Respondents answer, on a 1-to-5 point scale, such questions as:

If 80 percent of the company responds, the organization can compete with other local businesses for the designation of “Best Company to Work For.” The results come back on a scorecard that highlights areas for concern and improvement along with qualitative feedback in all eighty-six areas. Kenexa’s program works so well for Working In that the employees actually ask to participate every year. Scott and Haley are proud to score in the above-average range and are especially thrilled to have this level of engagement from employees. And the feedback is valuable.

A Team is a Team

Because the founders take care to make the right hire from the get-go, they feel comfortable keeping communication frank and open between themselves and with employees. As Scott put it, “In a sports team or with flat-mates, if your teammates don’t buy into who you are, it’s pretty hard to change. Ask for feedback and encourage it. Getting it up front mitigates most issues.”

But like any team, even the founders have contrasting views on communication and reviews. While Scott is okay with the casual huddle approach, Hayley understands that her staff may crave more formal reviews as a pathway to growing; she links this sentiment to happiness and retention.

This was my first interview with a husband-wife team that ran a company together. This couple complemented one another and finished each other’s sentences during the interview. As expected for a company in the employment industry, Scott and Hayley provided some great tips for other businesses that seek to grow, especially in the screening and hiring process.