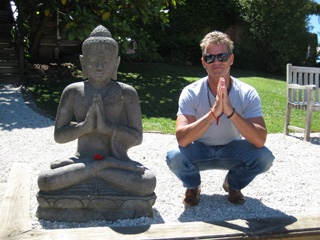 STONYRIDGE VINEYARD: You Don’t Get Reviewed in Nirvana

Steve White was busy having adventures after university when he gradually developed a reverence for wine. He studied horticulture, worked in wineries in California and Italy, and skippered yachts. Returning to New Zealand after a big worldwide yacht race, Steve was inspired to bring the culture and lifestyle of the great Mediterranean vineyards to his home country. Steve found his destiny on Waiheke Island, and started Stonyridge Vineyard there in 1981.

Stonyridge is not a corporate-style business. Perhaps it is the outdoor setting, or maybe it’s the Mediterranean aspect of a winery, or just Steve’s laid-back approach to business that makes it that way. Regardless of how the company culture has evolved, Steve has created a successful place to work. Over a delicious lunch, he shared the following insights on people management.

Nobody Wins in Performance Reviews

Nobody really likes performance reviews, but Steve sees absolutely no value in their current state. He feels that any formal review is somewhat confrontational and creates unhealthy expectations for a raise. In his view, reviews are time consuming, take a short-sighted view backwards, and create a lose-lose situation. Either the employee is denied a wage increase, gets frustrated, and negatively affects the company going forward; or the employer feels bad because he has been backed into a corner—possibly at a vulnerable moment in the business—and reluctantly gives a raise just to avoid a mess.

Walk Softly and Carry No Stick

Part of Steve’s terrible experience with reviews has to do with labor laws in New Zealand. In the United States, the typical employment agreement is based on at-will employment. Basically, both the employer and employee can leave the agreement with or without cause. Steve likens performance reviews in the U.S. to walking softly yet carrying a big stick. As he puts it, “you can do a job review that on the surface is very nice and politically correct, and end it with ‘sorry, empty your desk; you’ve lost your job.’ That’s a big stick.”

In New Zealand, it’s illegal to fire a worker in a similar fashion. For example, people have been caught on camera stealing and have still successfully sued their employers for improper dismissal. The picture he painted for me is, “imagine an underperforming employee. If you give him a harsh review, he’ll just be more disgruntled and disruptive, with very little recourse for the employer.” This is a major reason performance reviews are much more challenging to conduct in a more regulated workforce setting: in terms of discipline, the assessments don’t have any teeth.

Steve has implemented a robust bonus system at Stonyridge Vineyard. He’d prefer to abandon the review system for a transparent bonus system based on what value each person brings into the business. He might opt to give someone a bonus or pay raise spontaneously for a job well done.

Steve hires people to lead smaller teams and prefers to be a communication conduit between junior seasonal staff and their managers. The leaders follow the golden rule “praise publicly and admonish privately.” It seems to work well, as Steve says there are very few problems with employees. He can gauge their happiness by the energy they bring to their customer interactions.

Steve is a yoga instructor as well and began providing free yoga classes to his staff three years ago. His eyes lit up during the interview when he began describing the massively positive effects teaching yoga has had on the company.

As a yoga instructor, his approach is about service to his students as individuals. The bond between the yoga teacher and pupil is very caring and creates enormous loyalty. The team loves the yoga classes, and Steve claims that yoga solves all problems.

Rather than subjecting everyone to formal reviews and “PC” processes, Steve describes this scenario: “A staff yogi would work really hard and show loyalty, and if they have that integrity, when they approach you for a pay raise, maybe you recognize that they are right, but you still can’t afford the increase. Then they might suggest that they have to leave and make more money elsewhere, but will commit to giving you ample time to find a replacement.” No hard feelings, mutual respect, good vibes.

I definitely won’t be teaching anyone yoga anytime soon as I struggle to touch my toes. Yet, similar to doing group exercise like yoga, my friend’s company trained and completed a Tough Mudder race together. There was an immense amount of preparation, teamwork, and camaraderie. I’ll look to sponsoring groups of employees to train for a race or athletic event because I’ve seen the positive vibes and bridges it builds outside the workplace.

Borrowing a line from the popular Dos Equis beer commercials, Steve White must be “the most interesting man in New Zealand.” Instead of a lager, however, he’ll hoist a glass of fine Stonyridge Vineyard wine. To counter the negativity around performance reviews, he’s instituted a strong bonus system and teaches his workers yoga.

I was so intrigued after hearing that Steve created more loyalty from his staff by teaching them yoga that I asked, curiously, “so what’s next?” hoping to learn and share the next big people management trend. Steve smiled and replied, “Death.”