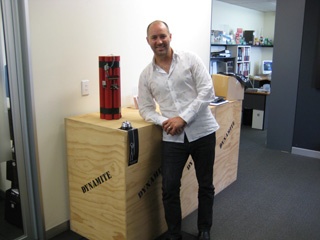 Mat Wylie has only had one job interview in his life, and he got that job when he was nineteen. Just a few years later, a partner at the ad agency that employed him wanted Mat and two others to buy him out for $250,000. Mat jokes that they probably didn’t even have $25 amongst them—much less $250K.

Instead, the three of them started Dynamite in 1995. Dynamite has evolved significantly over the past seventeen years. Like a comet approaching the sun, it shed some layers as it got brighter and more focused. First, it started as a full-service advertising agency. Second, after six years, they bought out one partner who moved to Singapore. Third, after eleven years, Mat Wylie bought out the remaining partner, Fletch, who left to run his family business and pursue his passion for flying. Fourth, Mat transformed Dynamite into a product company from its roots as a service agency.

Dynamite is now in mobile marketing with multiple product offerings using emerging technology. Their core product, Customer Radar, is revolutionizing the mystery-shopper industry. It’s a mobile technology that enables retailers to collect live feedback from customers in their store in exchange for a chance to win a prize, like an iPad. Instead of relying on one mystery shopper’s opinion, retailers can now collect hundreds and thousands of ratings and high-quality feedback from actual store traffic.

It wasn’t always the smoothest process, transitioning from a service-based business to a product-based one. But Mat knew that he had to do it after a long-standing, satisfied customer received orders from global headquarters to change their ad agency because “change is needed for the sake of change; that’s just what you do.” Mat sensed it would be too hard to grow a business built strictly on ideas.

Mat clearly remembered the epiphany he had years ago at an Entrepreneurs’ Organization retreat. He recited from memory the goal he set there: “I want to transform Dynamite from a service-based business to a product-based business that can be used anywhere around the world.” He questioned himself many times through this challenging transformation, but he stuck to his vision. Now Dynamite is at a tipping point with Customer Radar gaining significant traction.

Dynamite employs five people, and Mat likes their casual, family-like environment. Having a limited number of employees allows Dynamite to stay nimble. He does admit that the atmosphere will need to change as they grow. In the meantime, Mat shared the following tips and experiences.

For many years, Mat had partners, and they were all accountable to one another, but now he is the only one in charge. However, under New Zealand law, Mat’s wife—married to the sole shareholder—owns 50 percent of Dynamite. She acts like a business partner and helps keep him on track. At one point, Mat had three great ideas but limited resources. Mrs. Wylie held Mat’s feet to the proverbial fire and made him commit to only one —much like their courtship, which also resulted in a successful partnership. Well played, Mrs. Wylie!

Mat also has an invaluable community with his Entrepreneurs’ Organization network. He founded an EO Forum with other members. Together they created a superbly well-attended offsite event for global members to network and absorb knowledge from other business leaders. His fellow forum founders have helped him with HR issues, and he feels the accountability and support they provide have helped him tremendously.

Mat Wylie was the chair for the extremely successful EO University Queenstown event that brought entrepreneurs from around the world to New Zealand. His vision for the event was to create “Four hundred raving fans of all things Kiwi.” Everyone on board bought into this plan, and the vision also rallied support from sponsors like Air New Zealand. The vision was clear, short, simple, and effective.

Mat admits he learned a key lesson for Dynamite when chairing the EO University. He’s reevaluating Dynamite’s vision to make it razor sharp and clear, like the one he formulated for the forum. It worked for him when he changed the business model of the company from service to product, so now it’s time to look ahead.

Relax and Focus on Results

He admits that in the past, he felt irritated when workers came in late or left early. Now he’s more laid-back and focuses on results instead. Employees now come in after traffic dies down, which helps morale and increases productivity—a true win-win.

Mat doesn’t quantitatively rank his employees’ performances, nor does he force them to rate themselves. He doesn’t feel that’s the Dynamite way. He also concedes that his approach may be culture-specific, because Kiwis are less aggressive and confrontational than other parts of the world are.

Since Dynamite is more personal than formal, everyone receives continuous feedback. Mat won’t wait until a structured review to deal with someone’s performance. Since the company is small, there is always time for a chat.

Discipline the Behavior, not the Person

For anyone who needs to critique another, be it parent-child, teacher-student, or manager-employee, a good adage to remember: “Discipline the behavior, not the person.” Mat compartmentalizes the behavior from the person, so his criticism can’t be construed as a personal attack.

To illustrate, he may say, “When we take a condescending tone with our suppliers, it doesn’t align with Dynamite’s core values and isn’t productive. Moving forward, I’d like for this behavior to change so everyone whom we work with will have a pleasant experience with our brand.” He has had success with this approach. Down the road, his team appreciates the personal growth that such a style encourages.

I’m a fan of this approach. I disdain passive-aggressive behavior, so I always seek to engage. This is a good reminder for me to disassociate the behavior from the person since I can get caught up, especially if it’s a highly charged issue.

Mat has evolved Dynamite tremendously in the last seventeen years to stay ahead of trends. He’s bought out two business partners and moved into an arena (mobile) that wasn’t even around when he began the company. Mat freely admits that, as the company grows, they will need to adopt more structure, and he claims that he isn’t the one to drive it. One thing that should continue to work well into the future is his open communication style with his team. The constant flow of feedback among everyone in the company, combined with Mat staying true to his vision, has encouraged healthy iterative growth that Dynamite can enjoy for years to come.