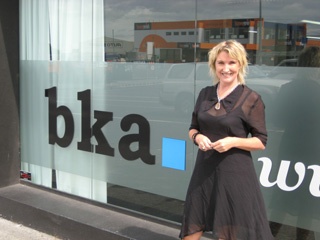 BKA INTERACTIVE: One Size Does Not Fit All

Barbara “Barb” Anderson is the bubbly, outgoing type who seems to follow fun—or does fun follow her? She attended University of Otago, New Zealand’s party school, infamous for its wild student life. She studied education and went on to teach while starting a family, but the puzzle pieces of her life just didn’t fit. Teaching was not for her. Restless from the rigmarole, she quit after her youngest child was born. She returned to school to study art.

Barb had a fantastic time at art school, reveling in contemporary mediums such as digital video and developing an appreciation for technology. Her friend, “a bigwig at Saatchi & Saatchi,” persuaded Barb to help on the production side of his firm. Barb, who recognized fun when she saw it, knew that she would have a steep learning curve but likened the challenging ramp-up to puzzle-solving.

Well, she must have been really good at solving puzzles, because shortly after her time at Saatchi & Saatchi, she started bka Interactive.

Founded in 2000 from her kitchen counter, bka now employs fourteen people and is an award-winning full-service digital agency that helps clients in all aspects of growing their business online, from website development to social media to building apps.

Initially, Barb thought she’d be at a huge disadvantage as a woman in her forties in the digital space. But she quickly learned that she was a relatable relief to clients, who dreaded getting design advice from a hipster-clothing-wearing-kid telling them they’d gotten their media strategy all wrong.

Since Barb hadn’t spent much time working at big companies, most of the processes that underpin bka’s success come from her being nimble, casual, and adaptable.

Here are some insights into how her casual approach has worked.

One of the key strategic moves in bka’s success: hire the right people from the get-go. She started the agency by hiring those who could do a better job than she could. Barb speaks affectionately about the quirky personalities on her team; it’s clear that she has built the company’s processes around them rather than trying to fit people into pre-set routines.

Because of New Zealand’s strict labor prohibitions against firing workers without numerous formal warnings, procedures, and mediation meetings, hiring the right person from the start is critically important to all Kiwi companies. However, a recent “three-month trial period” that the country implemented has helped employers like Barb to relax about hiring. While nobody has left bka within that trial period, Barb and other small-business owners don’t feel like they are taking an enormous risk when bringing on someone new. Nonetheless, screening for the best fit is built into a culture like bka’s.

The Best Laid Schemes of the Digital World

Barb sees no need to hold annual strategic meetings, because in a fast-moving, dynamic industry such as hers, what’s hot today could very well be replaced in six months by a more interesting opportunity. Instead, strategic planning happens often, as workload and production dictate. She thrives on this spontaneity. No recurring lesson plans for bka!

Barb is a big believer in providing constant feedback instead of bottling it all up for the annual review. She does this verbally and also through frequent bonuses to employees who exceed expectations. With a profitable company and low turnover, Barb wants to share the success with those responsible.

Barb has created a laid-back work environment and enjoys her friendly, casual bka relationships. Everyone sits together in an open-bullpen arrangement, so she hates the idea of sitting across from someone to critique their work formally in a review setting. However, she has recognized the value that such an arrangement holds for her staff: quality one-to-one communication on issues that perhaps have gone unaddressed. So Barb decided to delegate all of the performance reviews to her GM. This way, Barb is not directly involved, and she minimizes the dread or discomfort associated with the process.

Barb combines the performance review and compensation review and focuses the meeting on understanding where the reviewee wants to go in their career. Barb believes people should leave bka “equipped to enter their dream job.” So bka people are encouraged to own their career and find courses to help—the agency pays for training that will get staff members where they want to go.

No One-Size Fits All

Being an agency, bka has its share of unusual, creative personalities. Some of these folks don’t want to “play the game” and do a formal review process. They just want another raise. For these employees, Barb amends the process to fit the situation. She truly thinks that the process needs to be flexible.

Giving to Each Other

I got a bit of an education and a huge smile when Barb shared that someone on the team is randomly selected to make tea for their coworkers every Friday. A typical American might wonder, “How do you ‘make’ tea? Offer selections like green tea, Earl Grey, lemon? How difficult can it be?”

Actually, making tea for the Kiwis at bka is a very involved process. First, the randomly chosen team member has to hand-make the cake, goodies, or sandwiches by themselves. No outside help is allowed. Second, if you do a poor job, you’ll definitely hear about it! Friday Tea is a huge hit now, and everyone strives to outdo the others. What a great example of how culture isn’t just about the company giving, but also about employees giving to one another--and having a hoot along the way.

I love this idea! We hosted potluck holiday parties at BuddyTV, and they were always a hit; people would anonymously submit their dishes to be voted on by their peers. Coworkers were quite competitive whipping out secret family dishes for the win. I must admit that I finished 1st one year and 2nd the following year. Thanks for the winning recipes, mom.

From an unconventional path to starting bka, Barb has instilled a unique and flexible approach throughout her company. They don’t impose a rigid one-size-fits-all review process on everyone. Even more thought-provoking is the notion that bka provides continuous feedback, plus bonuses and raises when merited, throughout the year.

Every company will develop a culture whether its leaders are proactive in shaping it or not. So why not be proactive in guiding it? Most impressive is how the culture is now baked in to bka, and how employees have taken the lead themselves with Friday Teas and Dress-Up Fridays. Those particular events wouldn’t work for everybody, but Barb has tailor-made a culture that suits not just her but also the talent she’s selected to help her succeed.