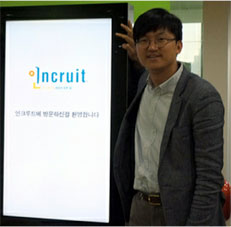 INCRUIT: Astronomical Passion for His Work

Kwangsug Lee disarmed and instantly engaged me with a friendly, boyish charm. He shared with me that in Korea, failure for an entrepreneur is frowned upon strongly and can very negatively affect future credit and employment prospects. However, there are new government policies that are trying to address this and to spur more innovation and startups.

As a boy, Kwangsug aspired to become an astronomer and not to work at the family business despite being the oldest son. Lee’s boyhood idol was none other than the famous cosmologist Stephen Hawking. After enrolling into one of Seoul’s prestigious university astronomy programs to study outer space, Kwangsug also began dabbling in the online space. In 1997, he started his first online venture, Zip.org, which was a Korean directory much like Yahoo. He was very passionate about this project and felt like he was giving back to society. Kwangsug managed to harness a team of twenty to thirty part-time volunteers from his university to help him maintain and update the thousands of links on Zip.org.

Then, in 1997, the Asian financial crisis created widespread economic turmoil throughout Asia, including in Korea. Samsung resorted to firing employees for the first time in the company’s history. Kwangsug began to discuss with his friend (now wife) how they could help people who became unemployed by the crisis.

Fired up after their conversation, he immediately brainstormed ideas. Three months later, in June 1998, they launched HumanLink, the first Korean Internet recruitment system that matched candidates with companies.

They ended up changing the name to Incruit, which is short for “internet recruiting.” Lee wanted the brand name used as a verb, too, like “Google it” or “FedEx it.” Job seekers would answer a battery of about a hundred questions and would then receive a text message if their profile matched the company’s needs. This service became a godsend for the unemployed who were frantically searching for jobs during and after the crisis.

Still enrolled in school, Kwangsug was at a crossroads between the successful launch of Incruit and his university studies. Kwangsug sought advice from his father, an entrepreneur, who recommended that Kwangsug follow his passion—adding that he could always return to school later. So in 1998, Kwangsug dropped out of his prestigious astrology program to focus on Incruit exclusively.

Today, Incruit employs 150 people and is one of the leading online-recruiting sites in Korea. By building Incruit over the last fourteen years, Lee learned a lot about being a CEO and leader. He shared the following advice.

When Zip.org grew to over twenty volunteers, Kwangsug needed a more formal place for his volunteers to work, but being a student without much cash, he didn’t have many options. So he approached an Internet café that was opening near his campus, cold-calling the owner. They struck a deal. Kwangsug would help the café owner with IT-related tasks in exchange for space to work.

Even more impressive: when he needed a bigger office, Kwangsug approached the Korea Association for Information and Telecommunications Promotion. He pleaded his case that the association should assist his endeavors because he was a student working on a project that would benefit the public. They agreed and lent him an office, ten desks, and a conference table, along with a fast Internet connection. He camped in that office for two years.

Not every student or young entrepreneur would have the courage to approach an Internet café owner, let alone the Korean Association for Information and Telecommunications Promotion, but working on projects that benefited the public emboldened Kwangsug. This passion translated into resourcefulness and the ability to convince others to support his cause. Every entrepreneur needs some sales skill, because at the end of the day, we’re always selling to potential customers, employees, or investors.

Lee hired his first HR person when Incruit ballooned to a hundred employees. If he had to do it again, he would have set up his HR team at around forty to fifty employees instead of waiting. He believes that HR is vital in creating a company’s culture, vision, mission, and processes. It’s much easier and effective to start doing this sooner rather than later in a company’s lifecycle.

Incruit’s three core values are honesty, innovation, and customer-centricity. Their HR actually evaluates all potential new hires along these three parameters in order to see how they would fit into the company culture. It’s very important to the company that employees embrace those values, and they balance cultural fit with skills fit. Incruit doesn’t just pay lip service to the company’s culture. Instead, they expose the culture and cultural expectations to employees starting in the interview process.

I’ll definitely look to bake cultural fit into future interviews starting with the job posting. I’ll ask candidates if they resonate with our organization’s values, which I incorporate into the job description. If they do identify with those values, I’ll ask how they embodied those principles in past roles. Might as well be upfront and transparent to candidates, so they can decide if they want to contribute to the organization’s standards.

Leverage Technology to Communicate with Staff

Connect with a Big Group in a Monthly Company Speech

Once a month, Kwangsug gives a state-of-the-union type speech to the company. At 150 employees, Kwangsug no longer gets the opportunity to interact with each employee, so the speech both personalizes him to employees and provides company updates. It’s also a venue to reinforce company culture, vision, and mission.

The Way to a Worker’s Heart is Through His Stomach

When I visited Incruit in April, they were constructing their own café on their floor. This is something that Jeremy Irish of Geocaching has done successfully in Seattle, and something I loved about Kasala in New Zealand. It’s a great example of using physical space to foster and enhance company collaboration and culture.

Find What Drives You

Kwangsug Lee made up his mind at an early age that he was going to study astronomy and forgo working at his father’s manufacturing company, even though he was the oldest son. Then at school, Lee realized that he loved working on public-good projects. This drove him when he worked on Zip.org and then Incruit.

Every entrepreneur needs to find something they’re passionate about since to be successful, they’ll be working on it 110 percent of the time and dreaming about it when they’re not “working.” Life is too short to work on projects for which you don’t feel passion.

Kwangsug Lee comes across as very soft-spoken and exuded so much thoughtful charisma. So I was impressed with how he dropped out of school and also boldly cold-called the Internet café owner and the Korean association to negotiate for free space. I was most impressed by how genuine and passionate he is about his projects. He emanates a sincerity that makes Incruit’s first core value of honesty feel genuine.

Rarely does a student find success right away on their first entrepreneurial venture. But passion guided Lee to help others and to build a great, sustainable organization that continues to help people find employment. Kwangsug Lee’s tips reinforce the need to find what one is passionate about before—and while—embarking on an entrepreneurial journey.