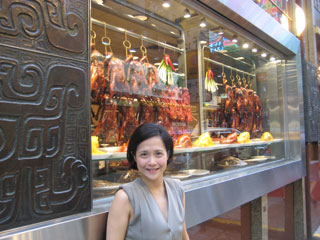 Yvonne Kam is the third generation to run her family business: the world-famous, award-winning, foodie-renowned, iconic Hong Kong restaurant Yung Kee. Yung Kee has served up signature roast goose and Cantonese cuisine for seventy years. In 1936, Yvonne’s grandfather Kam Shui Fai opened his first street stall, then moved into a commercial unit a few years later. That location survived Japanese wartime occupation, but not the air raids that followed, which led to a subsequent relocation, various expansions, and eventually a grand remodel of its current location on Wellington Street.

In 1968, Fortune magazine named the restaurant one of the top in the world, and Yung Kee has since been repeatedly recognized by many experts, from the local culinary reviewers of Hong Kong to Europe’s most famous hospitality reference publication, the Michelin Guide.

When Yvonne came on board five years ago, she managed financial control and business operations. Her responsibilities increased when the restaurant’s management transitioned from her uncle to her father.

Maintaining the thriving business meant that Yvonne had to bridge Chinese family business traditions with the modern-day expectations of customers and employees. Yvonne saw room for improvement—but improving processes and transitioning into the twenty-first century required change. How does one go about changing an entrenched seventy-year old company culture that has a life of its own?

It was bad enough that most operating procedures had gone unaltered for decades. Updating systems for managing the people who helped make the company great posed another dilemma. Many of the employees who have worked for Yvonne’s family since its early years are still dedicated to the business. A lot of Yung Kee’s distinctions are in its outstanding service. Never forgetting her deep roots, Yvonne recognizes the workers’ unofficial tenure, and she manages them with respect and sensitivity. Yvonne shares her tips and tricks for improving Yung Kee’s company culture while respecting old-school customs.

Strengthen Processes to Lay the Foundation for Culture

Old tried-and-true recipes are better for food—but not necessarily for operations. Yvonne inherited antiquated accounting processes when she started at the company. Every two weeks, the chief accountant would manually calculate payroll for two hundred employees. Granted, he used an Excel spreadsheet—but it didn’t have any formulas. In addition, internal controls were lacking, and employees continued bad habits that had seemed okay for many years.

Yvonne overhauled the accounting department and focused on turning around the mom-and-pop shop mentality. In one instance, she went so far as to count Chinese New Year cakes in order to manage shrinkage and especially to send the message to staff that accountability is a priority. Yvonne leads by example, laying the foundation to build a better company culture.

The loyal staff of Yung Kee is one of the restaurant’s keys to authenticity and success, but this also has its challenges. Older employees have worked with three generations of the family, and each generation managed the restaurant in a distinct style. On top of that, the business switched from Yvonne’s uncle’s stewardship to Yvonne’s father’s in recent years, so another change of guard destabilized employees somewhat.

Some employees faced these changes with political games and manipulation in order to preserve their own standing in the organization. New employees had a hard time surviving this game, and morale suffered. Workers either had to join in the backstabbing, or put their heads down and stay quiet.

The older generation of management would typically let these dramas play themselves out. Yvonne decided to put a stop to the toxicity. She wanted to take a positive approach, but an incentive program like Employee-of-the-Month, which might work at other companies, would certainly fail at Yung Kee’s. The winner of such a contest would be bullied mercilessly and resented. Instead of playing on people’s competition, she decided to develop employees without being confrontational.

I admire Yvonne’s willingness to tackle this issue head on since it would have been so easy to espouse a “keep doing what we’ve been doing” approach. I’m sure she didn’t win many popularity votes, but sticking with her conviction was the right business decision to make. At the end of the day, it’s not a democracy, and leaders have to make tough calls.

In order to improve retention and incentivize floor staff to go the extra mile, Yvonne started paying quarterly bonuses based on monthly performance ratings. Yvonne also enforced a new pay and promotion structure to help her staff—especially new and junior staff—thrive within the company. Before, junior staff had a hard time getting promoted at Yung Kee. Typically, staff members would have to wait for their manager to leave—not an enticing career path when the average staff stays over ten years. Now, all employees have the opportunity to get promoted, regardless of their manager’s status.

The new structure was well received by most, and all new policies are thoroughly analyzed, implemented, and communicated with caution to avoid harming company morale. Older employees are sensitive to change, so Yvonne consistently reiterates job security, reassuring them that new policies are simply for the betterment of the company.

Aside from customer comment forms, Yung Kee doesn’t have formal means of getting feedback from the employees themselves. Culturally, in Asia employees in lower ranks are highly attuned to the management hierarchy. Someone approaching a superior with a complaint or suggestion happens only rarely. If management knows what really goes on day to day, it’s not because they are receiving the communication directly.

Candid responses would be limited even if Yvonne reached out herself, so she assigned administrative staff to make daily informal rounds, reaching out to everybody, starting with “How’s your day going?” Based on this informal feedback, the restaurant management can react quickly to potential issues, which in turn signals to staff that these daily chats can make an impact.

Knowing what matters to her employees—job security, a career path, bonuses for recognition, company pride, and being heard—helps Yvonne improve her human resource challenges. She celebrates small wins because she recognizes that it takes time to change a company culture. Finding a way to get an older janitorial staff member to improve her methods is a point of pride—and it reflects Yvonne’s broader mission.

Yung Kee celebrates great wins too. Shortly after I interviewed Yvonne, the restaurant was awarded a “Caring Company” recognition by the Hong Kong Council of Social Service and a ten-year Quality Tourism Services Merchant Recognition award.

Yvonne acknowledges that she is risk-adverse, careful, and patient. These qualities translate into a sensitivity that might be her own greatest asset to moving Yung Kee Restaurant from a mom-and-pop shop to a corporation that can hold onto traditions and core values while thriving for generations to come.