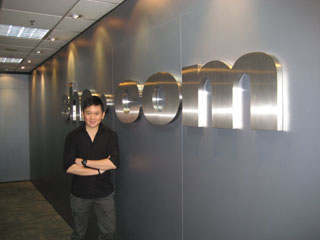 She.com is an Internet media platform and design house focused on marketing women-oriented brands. Like the beginnings of every good Internet startup, Derek Yeung and his business partners went with their gut instinct and no business plan.

She.com’s design focus grew organically from the start, when they outsourced development of the site. Usually designers and programmers work in parallel to develop a site. But for She.com the designer led the project and vision. Consequently, when the company formally hired programmers, the culture remained true to its design-focused roots.

When they launched She.com in 2000, there were already three or four players in the beauty and fashion space, and by the end of the year, She.com had at least a dozen competitors. By 2003, however, after the dot-com bubble burst, the only two companies in the sector remaining were She.com and Elle.com.

In Derek’s own words, “We were very worried because when Elle.com came out, we thought we were just a bunch of fashionable guys, why would anyone stick with us? They are Elle, as in the magazine!”

Fast-forward ten years: Derek is breathing easier knowing that She.com is here to stay. So how did She.com become the last man (or woman) standing? He credits his team for their strong design focus and the company culture, which he gives a high mark compared to typical Hong Kong companies.

Digging a little deeper into how the company culture evolved over time, I found out that like most of us entrepreneurs who start something from scratch, Derek had to learn a lot of lessons the hard way. He’d worked throughout his career in very corporate environments, and now that he was in a place where he could spread his creative wings, Derek had to adjust his management style and loosen up a bit in order to get the most out of his team at She.com.

Derek has incorporated a lot of the professional tactics that he learned from the Entrepreneurs’ Organization, which I’m also part of. His team works well together, communicating, bonding, and innovating. But Derek stops short of adopting the more radical American management styles that a U.S. tech startup might embrace. He is not ready to offer unlimited sick and vacation days, for example. Derek is experimenting with the amount of structure that creative thinkers need to be productive.

Here are some of the tips that have helped him to find his way.

Let Employees Do Their Job

In the early days of She.com, Derek was such a micromanager that he actually edited employees’ outgoing emails into perfect English. Aside from the fact that this practice wasn’t sustainable, he realized that he was holding back his team’s ability to develop their best ideas.

Derek knows that most designers would prefer to work in the middle of the night. Even his partner would show up at midday. So Derek gave up trying to instill a 9:00 am – 6:00 pm schedule and compromised by shifting work hours from 10:00 am–7:00 pm. But staff still came in late. Thinking that he needed to be inventive about enforcing the new schedule, he instituted a “late fee.” What resulted was people walking in late—with cash in hand and a bad attitude.

Derek’s designers argued that while the employment agreement might stipulate that you come in at 10:00 am, it also mandates a 7:00 pm closing time. So, if Derek required punctuality in the morning, they reasoned that he shouldn’t expect them to stay late at night. Derek appreciates the designers’ hard work and finally conceded that hard work compensates for a traditional structure. He has since relaxed how he views a work day’s schedule.

Create a Tiger Team from Within

She.com ran into a “good” problem. They were growing at a fast pace and working so hard on customer needs that they had to prioritize the revenue-generating projects over the internal work of redeveloping their own website. This dilemma was kind of like a fashion model being in such high demand that she doesn’t have time to update her wardrobe. She.com is a brand that caters to the fashion and beauty industry, a world driven by image. And in the online world, you have to constantly stay on top of the latest trends, or a competitor will leave you behind. She.com could not afford to let their brand languish and lose their audience. Social media facets of the site and dynamic mobile technology components needed renovating.

Derek got creative and culled a high-performer from each of the groups in the business to create a separate internal team that would focus on She.com. Initially, the management team put up a fight, as each department was losing a star. However, the other players on each team could then step up and take more responsibility. The internal team of problem-solving tigers has made really positive changes. Derek is happy with this decision.

Twice a week at She.com, they have a huddle to quickly review top-line issues and goals and to touch base. The team does not sit down in this quick meeting but remains standing; this keeps the meeting short and concise. In fact, the managers like the practice and have taken it to their own team meetings.

Creating Effective Reviews is a Work in Progress

On the other hand, Derek has not updated the review process, and the company is using a template passed down from a big conglomerate. As much as he might dread the review, he acknowledges that it’s a good jumping-off point to sit down, have quality time with his managers, and chat.

Don’t Wait for Formal Reviews to Get Valuable Employee Feedback

More enjoyable and relaxed are the chats that Derek has with his employees over smokes. They take cigarette breaks, but he partakes in a cigarillo. It’s in these impromptu moments that he learns about what’s going on and what ideas people have.

“As I age, so does my management team,” Derek lamented. “They are not old, but there are generation gaps. The younger people that we hire need to be listened to. Talking about online media without communicating with the younger generation—you think you are in the game, but you are not!”

I believe “Open Door Policies” are myths. For over a dozen years in all my past companies I’ve had only a handful of people walk through that open door. Instead, much of the feedback is through informal chats, formal 1-on-1s, and office gossip. Moving forward, this is definitely an area that I want to keep a pulse on because some of the best suggestions come from the employees who are closest to the problems and solutions.

She.com separated itself from the pack early on with a fashion-forward aesthetic. They have stayed successful by continuing to be progressive in the online-media space. Incorporating progressive management techniques goes with successful online companies like matching belt and shoes. One step at a time, Derek is evolving his people-management style so that She.com can stay on the scene for a long time to come.