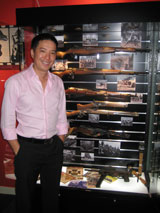 REDWOLF AIRSOFT: A Marksman in Business

“What is your favorite gun?” is a question that I never thought I’d ask during one of my careercation interviews. But that’s exactly what I did ask Paul Chu, founder and CEO of RedWolf Airsoft. For those who don’t know (including me, at the time), airsoft guns are highly realistic replicas that run on batteries, springs, and compressed air, capable of shooting up to forty pellets per minute. Some run on car batteries and can shoot upwards of six thousand rounds per minute.

It’s like paintball, but since you’re shooting a plastic pellet instead of a ball of paint, it travels farther, strikes more accurately, and YES—it hurts like hell when you get hit!

Paul started playing airsoft in 1996 as an escapist hobby. He quickly realized that there weren’t any e-commerce sites selling airsoft-related merchandise in the United States, so he founded RedWolf in 1998.

Paul, a former Andersen consultant with an e-commerce background, teamed up with Chris Pun, an airsoft expert. They’ve been partners for the past fifteen years, and they’re learning how to meld Paul’s Western management style with his partner’s Chinese management philosophy.

Paul and Chris have managed to successfully grow the business, with more than forty employees in London and Hong Kong. But like any venture, it’s seen its share of ups and downs. The following are lessons that Paul shared around leadership, culture, and people management, especially when balancing a Western/Eastern management approach.

Paul readily admits that he’s different from his co-founder, Chris. Paul describes his partner as more operations-based, whereas Paul is more sales-based. This difference rears its head when Paul tries to reset the company culture. Paul compares the quest for ever-elusive compatibility in business partnerships to seeking a spouse who has similar ideas on how to raise a family. Paul realizes that if he and his partner don’t agree about the culture, it’s very hard to disseminate consistent culture within the firm. That is his biggest challenge.

Be Patient for Improvement

In spite of management differences at the top, Paul candidly assessed that the company culture has improved from an “F” to a “C” in about a year. He is determined to keep raising the bar. Of course, such results rarely happen as fast as we entrepreneurs want them to.

Paul’s recent initiatives are showing positive results, such as monthly all-hands “town hall” meetings, social gatherings where everyone can speak freely after bonding over beers or wine, monthly leadership meetings, and 1-on-1s with employees. Training his partner in this new, inclusive, open communication style is taking as much effort as guiding his employees in these practices. Nevertheless, Paul sees positive results and keeps finding creative ways to get his message across.

Let the Personal Bleed into Professional

Revamping the company culture has not been a one-way ride, with Paul evangelizing Western styles of working to traditional Chinese people. In reality, he thinks that traditional Western management compartmentalizes emotions and separates the personal from the professional. But he doesn’t think that’s a viable approach in Hong Kong.

To illustrate, a key employee is going through a divorce, so he’s missing work. Paul has learned to be more flexible with him and has said to him, “Don’t worry about it, I understand. Listen, you can just do stuff at night.” The employee still cranks stuff out from home, and Paul supports an employee going through a rough patch.

Motivate Employees with More Than Money

Another time Paul realized that his approach needed major adjustment arose when Paul implemented an employee-incentive bonus plan. He meant to motivate his local warehouse staff with the bonuses. What happened surprised him. Acting insulted by his “stinking money,” they were more concerned about yi hei, which loosely translates into a code of brotherhood, loyalty, and personal honor. This loyalty is earned by caring, not money.

To those staff members, “caring” means showing that Paul has yi hei for them. For example, he sparks passion and loyalty by rolling up his sleeves to help his warehouse staff pick, pack, and ship until midnight, rather than paying them a bonus. Nowadays, Paul is better able to motivate his team by understanding their intrinsic value compass; all of his Western training would have led him astray without this cultural sensitivity.

Paul is a big fan of Cameron Herold’s management tips. Cameron will ask a room full of entrepreneurs to raise their hands if they think someone within their company should be let go. Inevitably, a sea of hands goes up. Cameron then exclaims, “You guys are all chickenshit!”

Employers are afraid to let the weak links go because they don’t think those employees can be easily replaced. But what about the cultural damage they inflict daily? No one is irreplaceable. What if someone quits or is hit by a bus out of the blue? As managers, we deal with those scenarios. Today, Paul identifies employees who are toxic to his culture and eliminates them as quickly as possible.

I think we’ve all had reservations about letting someone go. But what if that person decided to quit? The outcome would be the same. The person is no longer there, and you have to find someone else. Plus you’re probably breathing a sigh of relief. As Cameron Herold says to people afraid to fire bad apples, “You guys are all chicken shit!”

Paul rated his company culture an “F” when team communication lacked quality. Meetings were generic. Now, Paul regularly takes his employees out for dinner to catch up. For these dinners, Paul brings his wife along and expects employees to bring their spouse, too. This creates an equitable balance and mutual respect. A happy side benefit: it humanizes Paul to the spouse, who then becomes more sympathetic when the employee has to work longer hours.

For meetings at the office, Paul has a special place set up in his office to sit comfortably, one on one, to catch up on matters that a Chinese employee would not typically open up about in a straightforward way.

Paul maps on a matrix every employee’s performance rating and their on-time rate (employees are expected to start at 9:30). A dot and the last four digits of their phone number semi-anonymously represent each person, so they can quickly recognize themselves and see where they stack up against their colleagues.

Seeing themselves ranked on the board shocked the heck out of many employees. Many didn’t realize how poorly they were performing relative to others. Paul calls the lowest performing person “Bob.” Of course, no one wants to be Bob. In the town hall meetings, people think, “Oh my god, I’m doing that badly. I didn’t realize that everyone else was coming in on time.” This public display of performance has resulted in immediate turnarounds.

Drawing a Line at the Top

Reviews are taken seriously and conducted twice a year on a very well-thought-out matrix that accounts for communication, being part of a team, performance, and attendance.

But with management itself being reviewed by staff in a 360 peer-review process currently championed by progressive management gurus, Paul’s partner has to draw the line. In traditional Chinese top-down organizations, this loss of face would be totally unacceptable, inviting insubordination or an uprising!

Paul Chu is definitely a straight-shooter with tons of energy and classical entrepreneurial impatience. I can appreciate the challenges of balancing a culture constantly and slowly creating an effective blend of East-meets-West management style that works for RedWolf. It will be a constant effort, one I think Paul understands and embraces.

By the way, Paul’s favorite gun is the P226 that John Travolta used in the movie Face/Off, and RedWolf was one of my favorite offices to visit.