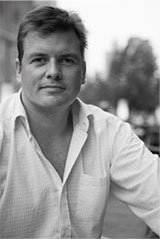 THE LARDER: Rigor + Artistry = Success in the Restaurant Business

When I met Steve Baker in Shanghai, he struck me as a gregarious, jocular, somewhat imposing figure—the type you imagine having played soccer or rugby all day long as a child. So it was amusing to hear Steve recount that, growing up in Australia, he rarely played outside. Instead he slavishly watched cooking shows, mesmerized; he took notes and proclaimed to his mother that he wanted to be a chef when he grew up. Steve didn’t disappoint, pursuing his dream with vigor by winning cooking competitions and working as a celebrated chef around the world before opening his first restaurant, Mesa Manifesto, in Shanghai.

I interviewed Steve Baker as he was poised to open The Larder Bar and Grill, his second restaurant in Shanghai. I admit that I had no idea what a “larder” was, so it was refreshing when Steve discussed the concept behind his new establishment.

Steve described a larder as similar to grandma’s pantry, with food, sauces, chutneys, and other staples. When people come to The Larder Bar and Grill, he wants the vibe to be similar to coming over to his house for dinner—warm, dependably tasty, and with an open kitchen.

When you have an open kitchen at home, it’s easy enough to keep it tidy and sanitary, but it’s much riskier for a restaurant to open their kitchen, coffee, wine, and chef’s stations for show to diners. Sanitation aside, the open strategy is part of Steve’s mission to demystify Western food to the Chinese audience. Cozy furnishings and a fun, interactive experience appeal both to locals who are looking for consistently good food and to expats who want a hearty, familiar meal.

Steve embraces the challenges of mixing cultures—both on the menu and in the restaurant’s operations. He shared the best practices he’s implemented to create not only a great restaurant but also a great business.

The main way that Steve Baker achieves a consistently great experience is by focusing on constant communication and training. Steve leverages the daily and weekly huddle technique that Verne Harnish espouses in Mastering the Rockefeller Habits. To get the ball rolling, Steve held weekly 1-on-1 mentoring sessions with his department heads to emphasize how important these regular meetings were. Initially, he encountered resistance, since his Chinese staff was not familiar with this approach, and his Western staff thought it was, quite frankly, a waste of time to hold all these meetings.

After six to nine months, Steve was able to establish a healthy daily and weekly meeting rhythm. However, it was not easy to get there, and Steve was the coach, cheerleader, and enforcer who ensured that his organization embraced these huddles. During these meetings, they discuss goals, competitions, and problems. The communication plus the mentoring not only improved the organization’s performance, but also improved retention, which Steve saw as a tangible validation for his approach.

Steve Baker is a strong proponent of empowering his team. For example, when the restaurant was new, his department heads would come to him in a paralyzed state, looking for approval and guidance when they needed to hire or fire. After continual training and 1-on-1s, Steve pushed these managers to make the critical decisions themselves.

Today, Steve doesn’t meet any candidates until they are in the final stage of the interview process. And if a staff member doesn’t work out, the buck doesn’t stop with Steve. The department head is responsible for documenting and letting the person go. It would have been easy for Steve to be a control freak on this issue, yet by empowering his team, they are happier and more engaged, and Steve can then focus on big-picture issues.

Train and Promote Within

I chuckled when I heard that Steve’s #2 chef drove a taxi six years ago, and that a supervisor used to wash dishes. But Steve was deadpan when recounting these promotions because he invests heavily in training, positioning it as the pathway to promotion. He puts his money where his mouth is by seeking to train, groom, and promote internally first. I think this is another reason why their retention rate is better than the industry average.

I’m a big fan of training and promoting from within. Usually, my first interview question is, “If we meet again in 10 years, what will you be proud to have accomplished?” Then I consider if we’re the right place to get that individual to their goals as quickly as possible.

If a new hire’s goal is to start a company or go to business school, at least I know from the start and will help direct their career arc in that direction. But if they are looking to grow within the business, then I think proactively about the steps and skills needed. I always want to give insiders a first shot since they’ve committed to us.

Oftentimes, Steve’s restaurant hosts internal revenue goals. Instead of just incentivizing the servers if they hit the goals, Steve involves the entire department. He posts the targets where the entire department can see their objective and how they’re progressing towards it. When they succeed, everyone gets to share in the spoils of victory.

In China, it’s common practice that employees receive a Chinese New Year bonus before returning to their hometown to celebrate in February. However, Steve Baker noticed that many employees would take the bonus and then hop to a different job after Chinese New Year. To offset this, Steve provides them a portion of their bonus prior to Chinese New Year. Then, he holds their annual performance review in March when they return, at which point they may receive the other part of their bonus plus any raise or promotion. This schedule more naturally integrates the big holiday bonus season with the review cycle.

For a restaurant guy like Steve, market research means having a solid night out with his management team. They’ll visit competitors and review the service, products, menus, and decor. When he does this, he takes only a couple of people from the same department, so that they’re focused on competitive observation. If he invites too many people, it devolves into a social event. So he’ll go with his small team to one place for a starter, another place for a main course, and another place for dessert. It really gets the team fired up, and they leave with the attitude, “we can do better than that!” which they bring back to their coworkers.

The eternal debate: all things being equal, would you hire someone with a better attitude but poorer skills, or someone with better skills but a poorer attitude? Steve said that he almost always prefers attitude over skill since he can train needed skills. This is particularly true for entry- to mid-level roles. He looks for the right body language, service ethics, and manner. Yet he did offer me the caveat that, if the role is more senior, then skills play a bigger role in the decision.

It’s always great to meet someone like Steve Baker who is living his childhood dream. Even more impressive is the rigor (meetings, 1-on-1s, training) that he instills into his business culture, which blends with the artistry of creating tasty dishes and drinks. I believe that it’s this balanced approach that has made Steve so successful, especially as a husky Australian in Shanghai. Fittingly, as Steve loomed over me to shake my hand after the interview, he cracked a quick smile and then was already set to jump into a 1-on-1 mentoring meeting.