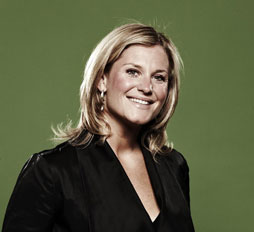 UNIMAIL: From Dying to Thriving

She was once a fire breather for the Sydney Olympics. She has been a janitor and a landscaper, has stuffed envelopes and tarred roads. Yet these are still just a handful of the jobs Andrea Culligan has had. Andrea has learned that she’s never too good for anything and pride doesn’t get in the way of doing hard work: these lessons have served her well through life cycles and jobs, but especially as the CEO and owner of The Unimail Group (as of this writing, the company name is being changed to Harteffect, but I’ll stick with what we talked about at the time of the interview).

An organization, like a civilization, can crumble from its heights, but hard choices can be made to rescue and rebuild its culture. It’s not easy, but it can be done: Andrea’s perseverance is a testament to that. Now, Andrea can add cultural surgeon and company cheerleader to her list of character-building jobs.

Unimail has undergone a few life cycles. When Andrea joined the company just after its inception in 1999, Unimail focused on providing emails to Australian university students, hence the name. Afterwards, Unimail diversified, creating a jobs guide for students and an online campus community. More recently, the company pivoted again, and the main thrust of the business today is corporate communications.

Leveraging its understanding of younger generations, Unimail now helps companies brand themselves in order to attract the right people at the right time with the right message. They are branding in twenty-four countries around the globe, with offices in Canada and Australia.

In 2010, Andrea Culligan was poised to exit the business due to misaligned values with her business partner. The result was Andrea’s actually buying that person out, and, like with a true divorce, everyone was unhappy. This started a downward trend for Andrea and Unimail: huge disengagement, high turnover, and a pissed-off staff.

The company had accumulated two years of baggage and negativity that needed to be purged. Unlike other organizations that wallowed in and ultimately succumbed to a corrosive culture, Andrea Culligan rolled up her sleeves to rescue and redefine Unimail’s personality.

Andrea shared the following insightful tactics and tips for anyone in a similar experience.

Andrea valiantly tried to change the mindset of employees, but after many attempts, she learned that some staff were mired too deeply in negativity. Either they weren’t able to change or didn’t want to. Andrea concluded that she was better off letting them go and bringing in much-needed new faces and attitudes.

As the person at the top of the pyramid, the CEO has to be clear about what the culture should look and feel like. Andrea decided to act it out in a big way: jumping on the sales desk after a big win, or saying thank you for everything to everyone constantly. She wanted to create a sense of enthusiasm and success, and she knew that it started with her.

She was also extremely transparent with the team. She even exclaimed to them, “We all agree this [culture] sucks. What do you guys want to do about it?”

During these team meetings designed to address their culture, Andrea felt frustrated that people were hesitant to speak up. To get even more involvement in the meetings, she brought small prizes, like a stationary set or funny erasers—things she knew her team liked—in order to spur interaction and discussion. These seemingly small prizes ignited a trend of higher engagement.

Bring in an Objective Voice

It’s not a sign of weakness to bring in outside, professional facilitators. In fact, these outsiders helped facilitate the crafting of a new vision and values. The outsiders’ involvement democratized the process, so it never felt like Andrea was pushing the process down people’s throats.

The vision the company originally had was not fully embraced. It was just there. It took them seven months to get rid of vague words like “innovation” and “happiness”—words that didn’t mean much. It took time to develop them, but the new phrases really mean something in the day-to-day activities of everyone on the team.

Together, the folks at Unimail crafted the following list of values:

Not only did the team identify phrases that were meaningful and personal to them, they also workshopped scenarios to practice their values, so that the culture could flourish on an ongoing basis.

Andrea was one of my favorite interviews and provided a wealth of invaluable tips. I like creating values that resonate, living those values, and then hiring and firing based on the values created. So many times I’ve seen organizations with values listed in their break room, but no one knows them, including the CEO. I’ll definitely strive to bring my future company’s values to life.

Live the Values of Which You Speak

Unimail wants to be known as “brilliant fun.” “Laughter” “community” and “passion” are in their mission statement, and they drive this ethos down to their suppliers and partners. If a supplier provides a lower cost but isn’t as engaging, the Unimail team will choose someone else to work with who is more fun, even if the other vendor costs more. They found that their clients were choosing Unimail not only for their work, but also for their engaging process and enjoyable interaction, so Unimail made that resonate through the supply chain, too.

Following another Tony Hsieh practice, Andrea tracks what employees have done to increase and improve the business culture. It’s one of the seven key performance indicators that each employee is accountable for.

Hire and Fire on Values

Even though Andrea Culligan has a frantic travel schedule, she maintains her weekly Monday meeting with her team. During these meetings, she asks three simple questions:

She keeps these meetings short and straightforward. This weekly rhythm also enables her to address any issues that may pop up, so nothing festers out of her sight.

Instead of going away parties, Andrea prefers Cameron Herold’s philosophy of celebrating new employees coming onboard instead. She shared with me that on the first day, a new employee will:

Andrea Culligan believes that performance reviews should always be about praise. She thinks that a manager should never wait until a yearly assessment to address any inadequacies or potential termination issues. Since she would address any red flags during her weekly 1-on-1s, problems should not fester long enough to make it to the annual review.

Reward the Actions that Help the Bottom Line

Andrea believes that 70 percent of the decisions made by Unimail employees directly affect margins. For example, these decisions could be improving prices from printers and media buyers or negotiating with freelancers for better terms. Andrea’s team knows that they’re able to affect the bottom line, which ultimately impacts their bonus. She has created an effective system of ownership where employees treat the business as if it were their own.

Offer a Choice of Bonus

When people go above and beyond and have earned a bonus, Andrea gives them a choice between cash or a gift. Most employees take the cash, but Andrea prefers to give a gift because it’s much more memorable. For example, one employee got the iPad 3 the day it was released. Another employee received a nursing chair.

Staying in Touch With a Monthly Newsletter

At fifty employees between two offices in different countries, not everyone knows about each other’s projects. Unimail created a monthly newsletter, which has been a hit and a fantastic tool for knowledge-sharing and internal recognition.

Honor the Employee of the Month

Once a month, everyone votes for the Employee of the Month, who gets a half-day off, a massive sombrero, and their picture in the newsletter.

To accommodate new moms and help keep them at work, Unimail is redesigning a conference room into a childcare area. To work around regulations, parents are in charge of hiring the caretaker.

It wasn’t easy, and only two out of fourteen original employees are left after fourteen months of reshaping Unimail. Walking around the offices, I could feel the positive energy and a sense that everyone truly enjoyed their roles. And Andrea isn’t resting on her laurels. Instead, she continuously seeks ways to improve their culture. Because, as we all know, it’s much easier to maintain a trajectory rather than to reverse it. And Unimail’s culture is definitely aimed at a bright, bright future.