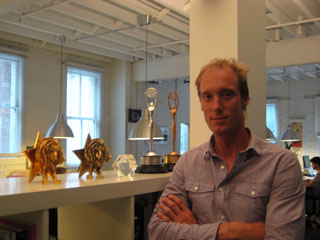 THE HALLWAY: Sailing and Prevailing

Jules Hall’s first job was driving a tractor around and around his family’s farm. From that experience, he learned that he hated getting paid a fixed wage for fixed work—he knew there had to be a better way. So, when Jules reached university, he got his creative juices flowing and started Jules Hall Productions, selling t-shirts at the local pub. It was ingenuity at its best because Jules could 1) drink pints with his mates while “working,” 2) meet women at the pub, and 3) make money by peddling his shirts. His all-time best selling t-shirt was emblazoned with the slogan, “If all else fails, excess prevails!”

After graduating from college (and from selling t-shirts), Jules took a turn at Andersen Consulting, and then joined one of the first digital agencies in London. The emerging digital media held exciting potential that stimulated Jules’ creativity, and the startup environment suited his adventurous spirit.

Eventually, Jules ended up as GM of a premier agency in Sydney. Being somewhat of a maverick, he started envisioning a new type of advertising business. Not wanting to be the digital equivalent of a bricklayer that performs only one function, Jules designed an agency that would combine the spectrum of elements needed to build brands for companies: an agency that would more be more of a “communications architect” than a specialized “builder.”

With that inspiration, Jules launched The Hallway in 2007 with a laptop and a borrowed office. They are continuously growing, but staying true to Jules’ original mission: developing creative ideas using a combination of advertising and content, PR, design, branding and technology.

The Hallway’s success has not flown under the radar: the company has been rated one of the “Hottest Agencies” in Sydney, according to Agency Creative/Billings Index 2012. Jules discussed what he’s learned over the last four years in order to get The Hallway to where it is today.

Jules Hall keeps the performance reviews simple at The Hallway, with a one-page-style review format. Under each bucket, he’ll put three to four bulleted examples: Continue—what you are doing that is great; Start—I want you to do (x); and Stop—what is not working. This becomes the focal point for each person during reviews and catch-ups, making their discussion succinct and easy to remember.

Similar to George Loiterton’s Love and Loathe exercise, I find Jules’ Continue, Start, Stop to be highly engaging and effective. In fact, I’ve used this in the past and really enjoyed the outcome. It’s also a great exercise to break out as teams in quarterly company meetings to see what employees think. The responses that are particularly noteworthy are usually the “Stop” comments.

Like most managers, Jules finds it difficult to keep on top of feedback with concrete examples. His tip is to write down staff wins and areas for improvement in the back pages of his black notebook. He always has ample examples with details to draw from when it comes time for performance reviews.

Jules freely admits that they just massively overinvested by hiring a Head of Operations. Yet he realized that for The Hallway to succeed as an agency, stronger processes and methodologies were needed to liberate creativity. It’s a bold bet by Jules to understand the main leverage points for growth and then to invest in it ahead of the curve.

Careful to “Not Do Business with Yourself”

At the beginning, Jules spent countless hours analyzing and reviewing spreadsheets and other business data points. He loved to dive into data. But his mentor questioned the value of so much analysis, and reminded Jules of The Hallway’s aim. His mentor basically said, “Sell some work and make some money.” It was a good reminder of the basics. If it works, then just carry on.

Jules admits that he used to fear people-management. But now it’s exciting and extremely rewarding when he gets it right. I think he realizes that as a manager, you are leading people on a journey, not just to a destination. And since every entrepreneur has a journey, why not have a positive attitude about it and smell as many roses along the way as possible?

Jules has successfully grown The Hallway from an idea over lunch to an industry award-winner. Along the way, he’s embraced teachings from his childhood, mentors and business experience. He’s created a rigorous work environment in order to get the best out of his people, and he’s designed a culture that hires for and supports this approach.

Jules Hall definitely has the presence of a thoughtful, intelligent leader with a personality that fills a room, yet at the same time he’s got a laid-back charm. I found him humble, self-effacing, and funny. He’s come a long way from designing “daggy” (Aussie slang for unstylish but comfy) t-shirts, and the future looks promising from down The Hallway.