Why Managers Need to Foster Peer Relationships in the Workplace

Think about all the day-to-day interactions your employees have with their colleagues and peers. It would be pretty crummy if they had to work frequently with people that failed to respect them and their work, let alone failed to show their appreciation. Sure enough, the value of peers impacts whether employees will want to stay on board or leave an organization.

Let’s just look at respect to begin with. Employees who noted that they did not have high levels of respect from their peers were nearly 10% less likely to see themselves with a long-term tenure at their organization (r = .24 , p < .001, n = 400). 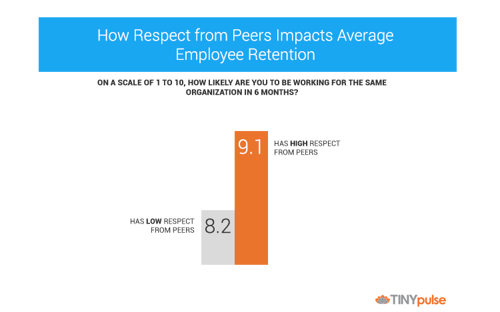 Peer recognition plays a similar role too. When we asked employees about the amount of appreciation and recognition that they get from their peers, those citing low levels of recognition were 11% less likely to plan on staying put (r = .24 , p < .001, n = 400). 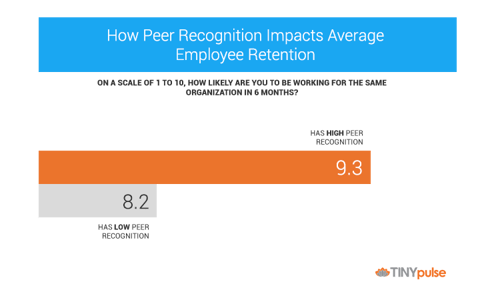 This isn’t terribly surprising, is it? In today’s cross-functional, cross-matrixed organizations, employees far more likely to interact with their colleagues than they are with direct supervisors and senior leaders. Our data shows that those day-to-day interactions can really make or break a work experience.

“The number one reason why great people quit is because A players don’t want to play on B teams. When we have fellow employees who we respect and give recognition to, it creates a culture of responsibility and appreciation. And when you have this, you have a space where your A players want to stay.”

Mel goes on to explain that how companies assess candidates during the hiring process plays a key role in creating great interpersonal relationships.

“The number one thing employers can do is hire candidates who show an attitude of positivity, innovation, and productivity during their interview. Skills can be taught and tweaked as time goes on, but attitude is the best indicator of compatibility in interviews.”

We can’t say it better than Mel. If you want to create a great place to work, you have to hire people that are great to work with. That means making a candidate’s “fit” just as important as their “skills” when deciding whether or not they get the offer.