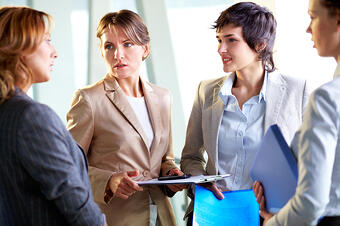 Think about who your top employees are. What qualities do they have? They’re good at what they do, of course, whether that’s handling tough customers or organizing events. But do they have what it takes to be good leaders?

It’s a common scenario: A team has a leadership vacancy, and a top-performing employee is tapped to take the helm. There are definitely advantages—they already know the team’s goals and have a relationship with the other team members. But you can run into a speed bump (or two) as your employees deal with their coworker becoming their manager.

It Doesn’t Matter How Good They Were Before

Once someone goes from team member to team leader, their biggest strength—their skill in the specific job—is suddenly irrelevant. Among the top five things employees want to change about their managers, we don’t see “needs to be good at doing my job.”

Instead, what we do see are the ways the manager interacts with their employees: communication, empathy and people skills, and being a team leader. And these could be areas where your new leader hasn’t had a lot of practice or instruction.

Or maybe they have these skills, but only in a peer-to-peer context. Even if the new leader communicated well and showed empathy in their interactions, they aren’t workable anymore. What worked as a coworker may not cut it as a manager.

Don’t Make It Too Lonely At The Top

The Center for Creative Leadership conducted a survey on leadership qualities. Across all the generations surveyed, the qualities that came in at the top were “participative,” “team-oriented,” “humane-oriented,” and “charismatic”—very much in line with the ones listed above.

And the qualities that aren’t considered important for effective leaders? “Hierarchical” and “autonomous.”

But a newly appointed leader might mistakenly think these traits are necessary. I have to show that I’m the boss, they think, and enforce a strict hierarchy. Or I have to prove I can do it all myself, so I can’t ask for any help. Instead, they need to find ways to prove their competence and authority that mesh with the qualities of a leader that employees ask for.

Even if your first-time manager has a lot of potential, they still have to navigate the transition (and all the obstacles it comes with). Set them up for success by mentoring them in the important skills like communication—and especially how to shift those skills from what they used as a team member into what they’ll need to lead the team. Not only will this help them, but by supporting your employee’s career development, you’ll also be fulfilling one of your most important duties as a leader.