What Does Beer Pong Actually Say About Your Organizational Culture? 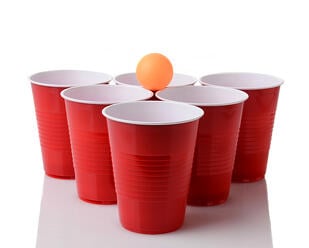 Beer pong is just about a white ping-pong ball, ten red Solo Party Cups, and drinking beer, right? Not so fast. We may be underrating this stereotypical college game. Those red cups could tell you a lot about workplace culture. Yes, you read that correctly.

More and more companies are installing their own beer pong tables in the office and using it to showcase their organizational culture.

A company that has beer pong doesn’t magically improve its culture or engagement levels. The mere fact that a beer pong table is present has no effect on happiness or productivity at all. But, beer pong can be a metaphor for a bunch of really great workplace characteristics that do make up a valuable company culture.

If a company has a beer pong table in the office, it is a likely sign that the organization:

Cares about building relationships separate from work: Playing beer pong, or any game for that matter, allows colleagues to get to know each other in a relaxed, casual setting. It also lets employees unwind after a long day or when they need a break to recharge their batteries. And friendships that are born from late-night beer pong games will increase your job satisfaction and morale.

Embraces new ideas: We don’t need to tell you that having a beer pong table at work is against the status quo. But, those red cups also represent something bigger and more important – it shows that your company allows employees to express themselves in a creative, open environment, rather than a stifling, regulated way. Your organization is open to thinking outside the box and doing things in a new, different way.

Allows anyone to participate: Anyone can jump right in and play beer pong. There are no rules about who is allowed to throw the ball. This same principle will likely carry to your workplace environment as well. It is probable that your organization fosters cross-departmental collaboration. If someone raises his hand and wants to take on a new project, he can.

Again, beer pong is not the be-all, end-all way to achieve a fun, healthy workplace culture. But, companies that play with these ten red cups usually share certain creative workplace tendencies, and that can be a great insight into their organizational culture.