It’s Monday morning. You had a killer weekend, but you’re exhausted. You head to the office and grab a cup of coffee on the way. By the time you make it to work, your mind begins to shift to the job responsibilities you plan on tackling that day. You walk to your desk ready to work.

All of a sudden, one of your coworkers runs over to a colleague sitting next to you.

“Dude, did you see the Seahawks game?”

“Russell Wilson is so awesome man. He’s just, like, otherworldly.”

Unfortunately for you, the game of football is astonishingly uninteresting. You don’t get it. Big men running into each other at full speed — despite the knowledge of how detrimental concussions can be. And who’s the guy who kicks the football? Weird. Why are the coaches always screaming? It’s just a game.

Enthusiastic sports fans talking about football is not exactly the kind of conversation you want to be greeted by first thing Monday morning.

But there’s a problem: These people talk about football all day long. And it gets even worse when they start talking about fantasy football.

As much as you might want to tell your coworkers how silly they are for being so involved in a sport, you still love them and want to get along. But the Super Bowl won’t be held until February. How are you supposed to survive the next several months? We’ve got some tips:

01. Don’t talk about how much you hate football

If you get along with your coworkers swimmingly and let them know you hate football, there’s always a chance they will talk about the game even more just to give you a hard time. If you don’t have the best relationships with your colleagues and tell them you hate football, there’s a chance they’ll misinterpret your statement as unfriendly or even mean. Remember, there are things that you love that your coworkers probably don’t like. Everyone’s entitled to their own hobbies.

Maybe you hate all the football talk because you never have anything to add to the conversation. In that case, spend an hour or so watching a game or reading up on certain players. So long as you can add something to the conversation — it could even be about a team’s uniform that’s particularly attractive to you — you may find yourself not minding football chatter so much. Showing interest in someone’s hobbies can strengthen bonds. And who knows? You might even love football and just not know it yet.

In life, there are always things we have to do that we don’t want to do. In this light, consider your approach to the next football conversation as a career development opportunity. Imagine your coworkers are strangers and are talking about something you’re not too familiar with. Learning to jump into the conversation naturally without sounding awkward is a critical skill that could pay dividends down the road. Innocuous conversations are the foundations of many trusting professional relationships.

There’s no law that says you have to listen to your coworkers blab about football in the first place. So put in some earbuds and tune it out.

There’s nothing you can do to banish football talk from the office altogether. Don’t be a party pooper. Accommodate your colleagues and don’t let the banter get to you. They’ll appreciate it, and you’ll grow closer together.

Are You Working On the Friday After Thanksgiving? [Poll] 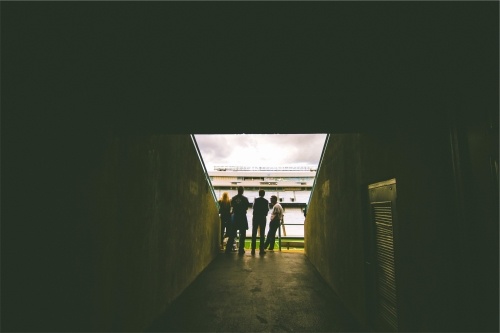 Number of Employees Skipping Work After the Super Bowl [Infographic]