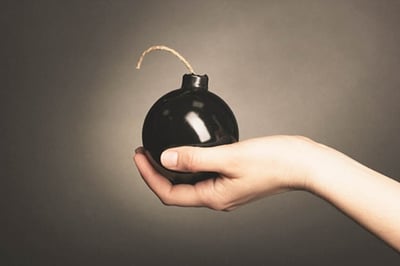 Maybe you yelled at a customer or made an employee cry. Maybe you strategically arrived 14 minutes late and left 11 minutes early for 17 years. Maybe you abused an expense account or screamed at a colleague.

Here are 15 of the funniest, most obnoxious, and most vengeful things people have done at work, as gleaned from this Reddit thread:

How’s this for a prank: A few summers back, a first-shift parking attendant was bored so he decided to park all of the white cars on the third floor of a gigantic garage. The unfortunate second-shift attendant had to stay late helping people find their cars in a seemingly endless sea of white vehicles.

The boss of a college student that was home for the summer used to always leave his coffee all over the store. Eventually, the student realized he didn’t like his boss, so he decided to hide said coffee whenever he saw it. The best part? The tradition continued after the student went back to school. Talk about juvenile, yet effective, mind games.

Who hasn’t done something stupid after a few drinks? One poor sap working at a national accounting firm that employed over 2,000 people accidently sent an email to the entire company during the wee hours. The CEO and partners must have liked the kitten picture because the worker was never reprimanded for the late-night email hijinks.

4. The giver of intentionally wrong directions

Before Google Maps, lost drivers popped into gas stations to ask clerks how to get from Point A to Point B. When that happened to a certain gas station attendant who was manning a particularly busy store, he asked the driver to patiently wait her turn. She refused, so he directed her to a mall 20 minutes away, though there was one just a mile down the road.

When you work at a coffee shop, you quickly learn how to deal with impolite and impatient customers. Still, every now and again, one might get under your skin, as demonstrated by a certain barista manning a drive-through window. When an irate customer demanded his drink be remade three times after repeatedly ordering incorrectly — and then asked for a pastry he never ordered in the first place — the barista pitched a muffin at him, hitting him right in the chest. It quieted him down.

An engineer was so used to his routine that when his boss asked him to put prototypical wafers of semiconductors in the oven, he did so right away. Unfortunately, those wafers didn’t come packaged like the wafers he usually dealt with, causing him to skip a few steps in his routine. The end result: $1.2 million of wafers melted in a few hours. D’oh!

Here’s a quick one: A lawyer used to work at a law firm. He left some case files in the mail room, which were then sent to the opposing side. The lawyer no longer works at the law firm.

Along with her colleagues, a hotel clerk was sick and tired of being bossed around by her manager who didn’t do any work and complained constantly. Eventually, the clerk found out the manager wanted to get pregnant, which is how she excused her behavior. Once she was pregnant, she’d quit on the spot, the manager said. As fortune ordained, the hotel clerk got pregnant herself. She didn’t tell her manager. She did, however, ultimately trick her manager into thinking she was pregnant by tampering with a pregnancy test. The manager quit immediately upon receiving the (false) positive news.

There’s no shortage of stories about waiters spilling food and drinks on their customers. Accidents happen, there’s no doubt about it. But one unlucky waiter had the misfortunate of spilling a freshly made milkshake all over a 7-year-old girl — on her birthday, no less. Talk about heartbreak.

Anyone who shares an office fridge knows how annoying it can be when food suddenly starts disappearing. So what’s the best way to catch the culprit? Two coworkers ate half of a pizza before scraping the toppings off the other side and replacing the marinara sauce with spicy habanero sauce. The duo sat back and observed, and the guilty party eventually ended up running out of the kitchen crying with mouth aflame. Food never went missing again.

Have access to chemicals? Make sure you understand what they are before using them. One newbie research chemist poured sodium cyanide into an organic waste container. The catch? The waste was acidic, and the resulting reaction filled the room with cyanide gas. Luckily, the gas isn’t as toxic as you might expect, and its presence was detected before anyone got hurt.

12. The employed guy who doesn’t have a job

One call center agent claims he spent his days at work browsing Wikipedia, Reddit, and Facebook — not answering the phone ever. Apparently his superiors forgot to enter his login information into the system, so he never got any calls routed his way. He didn’t tell anyone the entire year he worked there.

Sometimes, we can’t help but laugh, even if we know we shouldn’t. Case in point: A woman laughed at her pregnant coworker after part of the ceiling randomly fell down on her. Luckily, she and her baby emerged unscathed.

14. The physicist who doesn’t understand physics

An eager physics student was helping build neutrino detectors that each weigh about one ton. When he saw two pallets of them were about to hit each other, he tried to intervene manually. He ended up wedging his arm between two 15-ton stacks of detectors. Everyone stopped doing what they were doing because of his screams. Surprisingly, he didn’t break a bone.

After putting up with an obnoxious coworker that nobody liked, one assembly line worker decided to take matters into his own hands. One day, he made sure to work upstream from the guy and intentionally sabotaged his work. Because the boss didn’t like him either, Mr. Obnoxious was terminated on the spot. The avenging assembler did feel a little bad when he saw his former colleague crying as he packed up his gear.

You can’t really prevent any of the above from happening within your own walls. You can, however, reduce the likelihood that rogue employees attempt to sabotage your efforts by hiring the right people that fit your organizational culture and relentlessly focusing on team building. The tighter-knit your staff is, the more likely it is that everyone will always aim to do their best, and the less likely that your employees will ever end up on a list like this.