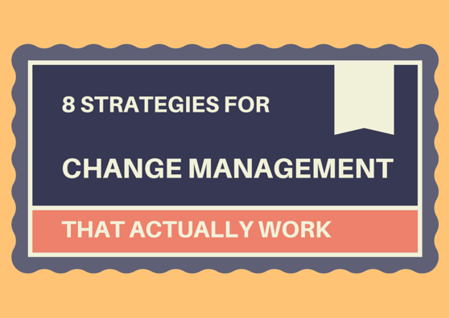 To remain competitive in the market, it’s crucial for companies to evolve and adapt to the changing climate. But organizational change in a company can be incredibly disruptive — affecting employees, top-tier executives, and the company success as a whole — if you don’t have strong change management. In fact, most efforts toward organizational change fail. Not many, but most.

Specifically, according to Torben Rick:

Clearly the majority of companies are not effective at change management. It’s not as simple as just changing a company name from the CEO’s office; deciding to merge with a similar successful company from the CFO’s advice; or undergoing a process, culture, strategy, technology, hierarchy, or management change, big or small. Successful change needs to take into account every aspect of the company, from the culture to the executives to the part-time staff and everyone else. There are several essential techniques for change management that companies can — and should — adopt before jumping into any change effort.

Start at the Top

Change management, of course, is directly impacted by the change managers. Ensure that the people at the helm of the change ship are competent. Before you even start any change, a CEO should align the best team at the top. So how do you know if they are?

Change managers aren’t just the strategy people — though that’s a very important part of the job — they also need to exemplify the change and be incredibly effective communicators so they can spread the word, bringing pride to the strategy.

Ask for Feedback, Even Before You Begin

It’s one thing to ask for feedback once your organization is shoulder deep in a change initiative, but you’ll be far more effective if you begin your change strategy with feedback already in hand. Too often these major moves are entirely planned by high-level executives without anyone else’s input.

According to a Katzenback Center survey, 38% of lower-level employees do not agree with the change initiative their company is undergoing. This type of information and opinions from frontline employees, often the ones who are directly affected by the day-to-day of the change, can help streamline the change and better set it up for success.

Define Exactly What the Change Is

It’s not enough to just state that your company will be undergoing a transition. It’s essential that companies set definable, achievable goals for the transition as clearly as possible. For example, while it’s nice to say that a change in upper management will “boost company morale” or “accelerate growth,” it’s far better to set exact statistics that can be measured for success.

Make these goals “SMART”: Specific, Measurable, Action Oriented, Realistic, and Time Bound. That way, not only will you give your employees a concrete objective to look forward to, but you’ll also be able to measure your progress in a useful way.

Just like defining the exact changes, keep it simple. Don’t try to do too much at once, as success can get muddled and employees can be confused. Stick to a goal and define it as simply as possible for people at every level of the company.

Remember when you took part in high school science experiments? Your teacher likely taught you about the scientific method. You can use this method for introducing change into your company.

Begin by introducing the change into only a section of the company, which will act as the “treatment group,” according to Harvard Business Review. The unchanged portion of the company (or team) will be the control group. The differences in productivity, morale, finances, and other statistics can help determine whether the change can show success across the entire company or whether it’s a failure and needs more tinkering before escalating it. Of course, far more sophisticated measurements can also be drawn from the information if you have the resources.

Remember that clearly defined goal? It shouldn’t just be finances and figures. The emotional aspect of organizational change is just as important, particularly to get all employees on board — especially for millennials who are driven by company values that reach beyond its four walls. Make sure there’s an emotional drive toward making a change — whether it’s entering new markets to help people from other parts of the world or something tailored specifically toward your company. Don’t overestimate the value of the dollar; don’t underestimate the heartstrings.

Companies that have embedded employee recognition programs — and all of them should — can implement rewards for employees who are best aiding in the change. Tailor the rewards to specific actions and company values that help the change. It shows employees how to model their behavior and actions toward what the upper management is looking for in this time of upheaval. What’s more, it shows that the company truly appreciates and acknowledges its employees during what can be a difficult time for many staffers.

It’s not enough to communicate the change at the outset and then assume all employees are on board. Look constantly for feedback — and actually use that feedback to adjust and realign your strategy as needed. Short surveys, team meetings, and company-wide webcasts can assist and ensure that employees all stay on the same page during this time of transition.

Organizational change, no matter how big or small, can be a stressful time for employees at every level of the company. This is why effective change management is so crucial. Keeping employee morale high with strong communication, a culture of feedback, and employee recognition can work wonders in ensuring that your change initiative doesn’t go off the rails even before the transition.

Editor's Note: This post was originally published in June 2015 and has been updated for freshness, accuracy, and comprehensiveness.

Organizational Change Done Right: Examples from the Giants of the Industry

Successful Organizational Change Is Easier Than You Think