The Damage Caused by Employees Not Taking Time Off 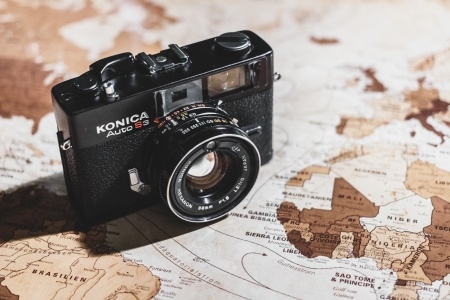 If you say you’ve never been stressed at work, you’re probably lying. Everyone everywhere has had those days, weeks, or — gulp — months in their jobs that turn them into a harried bundle of stress. It’s why the term “mental health day” was coined. And yet, despite the term, employees aren’t taking advantage of time off.

According to the US Chamber of Commerce:

We all know these workers — and frankly, it’s statistically likely that we’ve all been these workers. The ones with what the US Chamber of Commerce calls the “work martyr complex”: employees who believe if they took a day off, the job would completely fall apart. Many others feel that work has piled up so high, they couldn’t spare the time or their boss won’t support it.

While the responsibility for taking PTO falls to the workers themselves, managers must be accountable for combating the work martyr complex that makes it so difficult. A good leader must make it a priority to ensure employees feel comfortable taking time off.

The work martyr’s fears are not just unfounded, they are the exact opposite of reality.

The US Chamber of Commerce study found that 90% of business leaders thought that employees who use PTO are more ready to work efficiently and productively. And this belief is borne out by research. Take a look at these findings from The Whitehall II Study and Ernst & Young that show the dangers of overworking:

The US Chamber of Commerce also found that 90% of leaders said that using PTO cut down on sick days and boosted office morale. And every manager knows how important morale is to employee engagement and retention — a.k.a. your bottom line.

Employees agree. Despite not taking their PTO, 74% of employees in companies that encourage using PTO report being either “extremely” or “very happy” in their personal lives. Taking PTO also boosts their workplace happiness and makes employees more likely to be very happy with their professional success and financial situation.

Managers and employees are on the same page: taking time off is beneficial to both personal and professional success. It helps workers stick around on the job while also boosting the quality of their work. 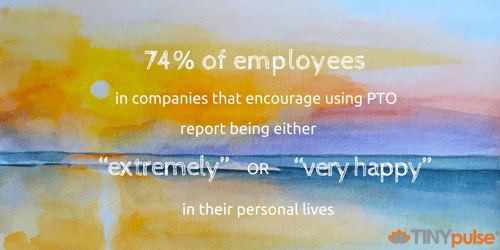 Be the Kind of Boss Who Makes Your Employees Leave

So what does all this mean for managers, and how does it fit in with being a good leader?

The Center for Creative Leadership conducted a survey on leadership qualities. Two of the ones at the top are “team-oriented” and “humane-oriented.” And a humane, team-oriented manager cares about the morale of their employees. Rather than pushing them to churn out work all year long, this manager is more likely to suggest they take a week or two off.

Letting employees go on vacation — what’s more, encouraging them — doesn’t make a manager “weak” or “soft.” It doesn’t mean you can’t say no to your workers. It makes you a better leader.

Change the Meaning of Teamwork

There’s a false sense of being team-oriented that many workers fall prey to. They won’t take time off because they think that their work will fall on already busy coworkers, that they’ll be letting their team down.

It’s the manager’s job to redefine what “team-oriented” really means. And it doesn’t mean insinuating that taking time off hangs coworkers out to dry.

Instead, managers should reinforce team leadership with their actions:

Team meetings shouldn’t just be about work, work, work. Ensure there’s time at the beginning or end to talk about how people in the group are doing personally at work, and find ways for coworkers to help support each other. It shows that they’re important to the team for more than just the hours they put in at the office.

Help team members see that taking PTO boosts productivity and morale — a far more beneficial thing for the group in the long run. 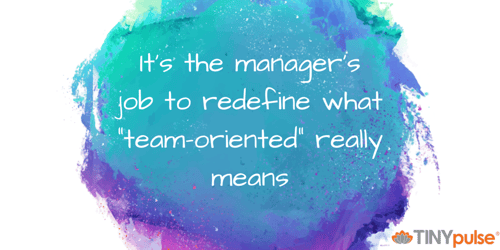 Managers should be compassionate, helpful, and generous with their employees — both professionally and personally. If a top-performing employee has suffered an illness or a family crisis, though it honestly may put you in a bind, show empathy and understanding. Give them the space to take care of themselves without worrying about rushing back to the office. Making that employee feel like they are sacrificing too much for their job will be much worse in the long run than allowing them to take the time now.

The same goes for overworked employees. Constantly reach out to your workers to check in on their happiness and satisfaction in their job roles. Listen. Engage. Though it may seem like common sense, your employees are people, too, not just cogs in a machine, and too often many feel they can’t take time off just because they are feeling stressed. Sincere concern from their boss might make the difference between a burnt out employee and one who takes the time off they need — and comes back rejuvenated.

Employees not taking their PTO might not be an issue on your radar as a manager. But the consequences can ripple throughout your company in the form of lower productivity and engagement. Be the type of leader who attends to the morale of their employees — even if that means you have to make do without them once in awhile. A few days off can have a huge impact on your company in the long run.

Apr 1, 2020 9 min read
5 Revealing Truths About Millennials in the Workplace

5 Revealing Truths About Millennials in the Workplace

Aug 12, 2016 3 min read
The One Piece of Professional Advice Millennials Give to Each Other 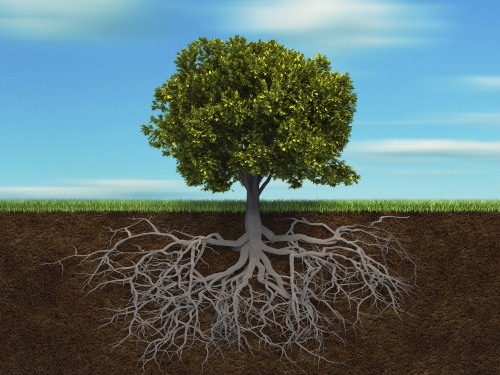 The One Piece of Professional Advice Millennials Give to Each Other