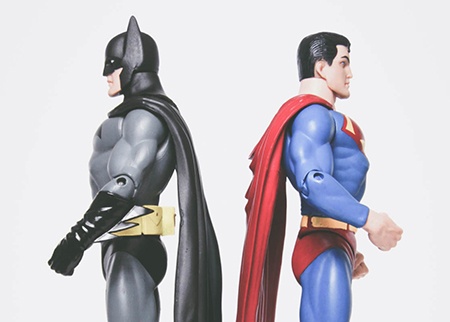 Later this month, comic book fans across the globe will line up to see Batman take on Superman on the silver screen in Batman v. Superman: Dawn of Justice.

It remains to be seen how that battle will turn out. In any case, the movie provides the perfect opportunity to compare the two superheroes to see who makes the better leader. Would you rather have Batman or Superman running your operations? Here are some things to consider:

Bruce Wayne is filthy rich, which means Batman’s got a slew of cash too. Assuming you didn’t have to track down archenemies like Joker and Penguin, working for an extremely wealthy crimefighter would almost certainly have its perks.

According to our Employee Engagement Report, nearly 25% of employees would take another job for just a 10% raise somewhere else. Since Batman has access to seemingly infinite amounts of money, it’s safe to say he wouldn’t hesitate to pay his employees very well (at least we hope so).

2. Superman is super strong and fast

Superman is blessed with insane amounts of speed and strength. So he would be an enormous asset the next time your organization decided to move locations or renovate the office. The company wouldn’t have to hire any professional movers or remodelers, and employees wouldn’t have to break a sweat chipping in. There wouldn’t be any downtime, either.

Just make sure you don’t get matched up against Superman during any physical activity or game at the company picnic.

3. Batman has a lot of enemies

There’s no shortage of folks trying to take Batman down. His long list of enemies certainly puts a damper on his business prospects. How can the Caped Crusader focus on growing his company and keeping his employees engaged when he’s always looking over his shoulder?

4. Superman can be controlled with kryptonite

Some employees may daydream that they had the ability to control each and every move their boss made. With Superman at the helm of a company, that daydream can become a reality. An employee would simply have to find some kryptonite and threaten Superman every time the superhero acted against their wishes.

So while Superman may have superhuman strength, speed, and agility, he can be controlled by a rock. To be fair, the rock is hard to find. But once it's found, Superman becomes more or less powerless over the person who holds it.

5. Batman is a human being

Even though Batman has trained incredibly hard to become as strong and powerful as he is, at the end of the day, he’s still a human being. Since he’s a human, he can get distracted. He can lose his temper. He can drop the ball and forget about a project. And he can burn out too.

Yes, that sounds like virtually everyone — except for Superman. Because Superman isn’t a human being, he’s capable of producing a lot more than his mortal counterpart. Forget missing a deadline with Superman on your side. He can cram a year’s work of worth into a few minutes if he needs to.

6. Superman has superb vision and hearing

Got drama brewing around your office? Hire Superman as your CEO, and all of those problems will disappear immediately. Thanks to his flawless vision and amplified hearing capabilities, Superman is the quintessential HR professional. He hears and sees problems the moment they materialize, and thanks to his speed, he works to remediate them a split-second later.

If you're at a fast-growing company that needs lots of cash to expand, you’d probably be better off letting Batman take the reins of your operations. But if you’re looking for a leader who can help everyone and be in all places at all times — while not having complete authoritarian power — Superman’s your guy.

Who's your pick? Let us know in the comments below!