Indianapolis seems as unlikely a place as any to start a billion-dollar tech company, but in 2001, Scott Dorsey started on his journey to do eventually just that. The story of ExactTarget, acquired for $2.5 billion by Salesforce in 2013 is not only one of unlikely success, but a testament to the power of a strong company Culture.


Creating values that employees can depend on, at all times

From the start, the values Scott Dorsey chose created a culture framework which employees could depend on. At ExactTarget, these were the roadmap for how leadership made decisions, and a guide to employees for how to succeed in the organization.

For Dorsey, culture starts with a strong set of internal values. Values that won’t just live on a wall, or on paper, but in the everyday actions of everyone in his organization. The values of his organization needed to speak to where they had been, and where they were headed, and they needed to scale as the company grew, empowering employees in their interactions with clients, and with each other.

While the mission and “future vision” for ExactTarget changed over the years, the staying power of their values speaks to how ingrained they became in a culture that is now infamous. And Dorsey could tell that they had been successful in crafting ExactTarget’s values when he could see the words being used, and each value coming to life in everyday behavior.

A well-referenced study from 2013 on company culture from M.I.T. found that “Integrity is positively correlated with financial performance and attractiveness of job offerings”. Since then, increasingly more research has been done into the connection between culture and profit. Last year, a joint study from Aon Hewitt, Denison Consulting, University of South Florida, Michigan State University, and the International Institute for Management Development found that of the groups which it surveyed, companies whose culture was well-rated by employees early in the study generally had higher profits in later years.

How to make your culture a self-sustaining brand

When his CMO, Tim Kopp, came to Dorsey in 2008 with a unique proposal, it sparked a turning point for the company. The conversation started with recognition that the culture they had was setting them apart. Kopp wanted to brand the culture itself, and that proposal led them to a conversation about being intentional with the culture that had thus far naturally developed. If they gave it a name, and a brand, it would take on a life of its own. They chose a name which encompassed everything they prized about ExactTarget’s amazing ethos: Orange. It was high energy, passionate, energetic, and unique.

As they started to promote Orange internally, Dorsey remembers, “it became our pulse, our heartbeat, the thread that held us all together.” They would fly people in to their headquarters in Indianapolis to be immersed in the culture and mission early on in their employee lifecycle, from all over the world. It was a huge investment, but it really celebrated and onboarded people into the culture. Upon reflection, there are three things that Dorsey says were instrumental to solidifying “Orange” as a movement:

Branded Culture serves a second purpose as a recruiting tool

As ExactTarget grew, and the culture began to succeed on its own, there were two commitments that separated Scott Dorsey from the rest; his commitment to transparency and to giving back.

Transparent leadership is the number one culture driver 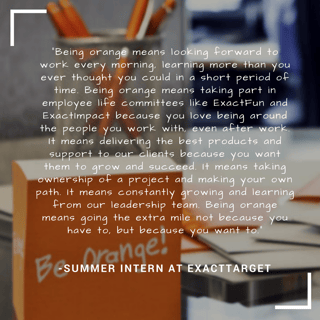 In that initial study by MIT, they found that “high levels of perceived integrity are positively correlated with good outcomes, in terms of higher productivity, profitability, better industrial relations, and higher level of attractiveness to prospective job applicants.” Integrity was easier to maintain with a small organization, but as ExactTarget grew, the small family-feel of the office needed more careful stewardship.

When it wasn’t feasible to be in touch with every employee anymore, Dorsey came up with an idea; a company-wide email update, to go out every Friday. These became his way to communicate what he was thinking about, what he was preparing for, how the company was doing. Friday notes helped keep a hold of transparency as the company started to scale, and the transparency he’d been able to maintain with a few hundred people was protected as they grew to be a few thousand.

Every Friday for 5 years, rain or shine, that message would appear in employee inboxes. Meanwhile, employees wanted to be involved. They would send in pictures and stories and also, they would send feedback. And every message was responded to—letting employees know that their feedback was important and that it would be listened to. 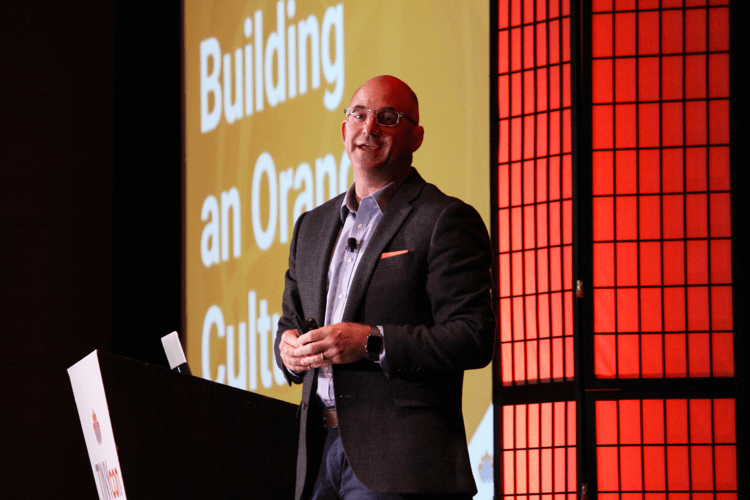 The other commitment Scott Dorsey made early on was to incorporate giving back into ExactTarget’s yearly commitments.

The Boston College Center for Corporate Citizenship found a positive correlation between volunteer participation and active employee engagement in the workplace. It’s possible that engaging employees in their life outside of work increases their commitment and enthusiasm on the job, since the people in the organization tend to also be members of the local community.

At ExactTarget, ExactImpact was an initiative that they began, to be able to give back to their communities through donations of time and capital. Dorsey found that giving back became a well-liked culture driver, and another way to reinforce the values of the organization. Today, the charitable portion of ExactTarget’s charitable branch lives on, instead called NexTech. And employees from the ExactTarget days are still living and giving within the Orange culture framework.

Measuring the impact, in profits, but also in staying power

5 years after the acquisition of ExactTarget by salesforce, the impact of Dorsey’s “Orange Culture” is still felt and studied. As a ubiquitous symbol of upbeat corporate workplaces all over, it’s clear that branding and marketing his culture internally was a decision which increased the momentum and eventual value of the $2.5b company he spearheaded. Today, companies like ING and Avalara use “Orange” as a title for their cultural brands, and many books and articles have been written discussing the success and novelty of ExactTarget’s approach to improving employee engagement by branding culture.

Scott Dorsey spoke at this year's TINYcon 2017. To reserve your tickets to next year's TINYcon, and make sure that you're keeping up to date with the latest in employee engagement and company culture, get your early bird tickets now! If you're looking for more tips or info on improving company culture, you can also read our culture report here.