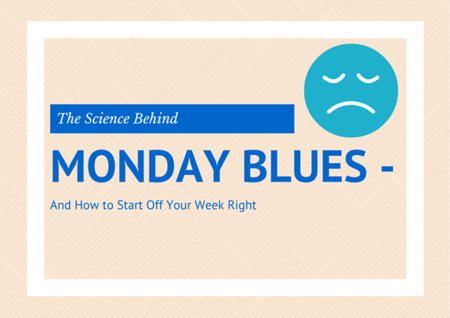 If you’ve never dreaded heading to work on a Monday morning, there’s almost certainly something wrong with you. No, it’s not a matter of personal opinion either. According to a recent CNBC article, workers are most unhappy at precisely 11:17 a.m. on Monday morning.

This probably doesn’t seem that surprising. On the flipside, we could estimate workers are likely happiest at something like 3:47 p.m. on a Friday.

Why is this? According to science, we feel most miserable on Monday mornings for a variety of reasons. Here are some of them:

1. We mess up our internal clocks over the weekend

With so many responsibilities and commitments, it can seem impossible to get the recommended seven or eight hours of sleep every night. Though it might sound counterintuitive, using the weekend to catch up on your sleep can actually make you more tired on Monday morning, according to Lifehacker. Mess with your internal clock, and you’re bound to feel more exhausted.

2. There’s a big emotional shift between Sunday and Monday

When you move from Monday to Tuesday, you’re going from a workday to a workday. As a recent New York Times article points out, we feel lousy on Monday morning because we move from Sunday, a non-workday that we generally enjoy, to Monday, which marks the beginning of a five-day workweek.

3. Some of us overindulge over the weekend

It’s not uncommon for folks to have a few cocktails over the weekend. During football season, some workers might toss back a bunch of cold ones with their buddies while they watch the games. Drinking, of course, isn’t good for you. Don’t forget that hangovers really do get worse with age, according to NBC. You can’t expect to feel motivated on Monday morning if you’ve consumed too much over the weekend.

4. We’re actually unhealthier when the week begins too

5. A lot of workers don’t like their jobs in the first place

Some people can relate to the Monday morning blues rearing its ugly head on Sunday evening — or even afternoon. This is likely experienced by folks who don’t like their jobs at all. According to Gallup, only 32% of workers are engaged, so there are an awful lot of people who fall into this category.

Now that you understand that you’re not unique in suffering the Monday morning blues and that, in actuality, being sad when the workweek begins is practically an innate human characteristic, let’s turn our attention to specific things you can do to enjoy Monday mornings once more:

Nobody wants to show up to work on Monday morning and immediately drown in their assignments. Rather than procrastinating as the workweek winds down, try as hard as you can to use an hour or two on Friday afternoon to prepare for the upcoming week. This way, you’ll enjoy a soft landing on Monday morning. Even if you dread having to be in the office, you can at least ease back into a new workweek.

2. Ignore your work email over the weekend

Sometimes you’ll have no choice but to keep tabs on your work email over the weekend. But whenever it’s possible, do your best to unplug on Saturday and Sunday. Everybody in the world needs a break from work. Use the weekend to recharge your batteries so you start Monday morning off on the right foot.

3. Say no to debauchery

You’re not in college any more. Nobody thinks you’re cool because you can pound beers with the best of them. Instead of continuing to act like you’re 22 years old on Friday and Saturday night, take up some more wholesome weekend activities. Go hiking, go antiquing, or channel your inner artist. This is not to say that you can’t enjoy a cocktail or two. But as they say, everything within reason.

You won’t be able to be productive on Monday morning if you’re insanely tired. Heck, you might not even make it out of bed. To reduce the chances you’ll deal with the Monday morning blues, try to get a good night’s sleep every night during the weekend. Though you might not want to hear it, you should also try to get out of bed on Saturday and Sunday at the same time you wake up during the week.

We all need money to pay our bills, eat, and do things. But that doesn’t mean you should jump at the chance to work at any old company that extends you a job offer. According to our Employee Engagement Report, work culture is strongly correlated with employee happiness. So if it’s possible, don’t take a job at a place that you’re not so sure about. Wait until you find one that makes you excited. This way, you may even look forward to heading to work on Monday morning because you believe in your company’s mission and you can’t wait to see your coworkers.

6. Have something to look forward to Monday night

In order to get through the day, you need to have something to look forward to at the end of it. Whether that’s going out to dinner with your significant other, reading the next chapter in a book you’re immersed in, or posting up on your couch to catch up on your favorite television shows is up to you. Having something exciting scheduled after the workday ends is a great way to get rid of, or at least cope with, the Monday morning blues.

This, of course, is not a foolproof solution to cure your Monday morning blues in perpetuity. From time to time, you may feel a bit of despair when you step into the office for the first time each week. Such is life. But by understanding why you’re likely unhappy on Monday morning in the first place, you can take proactive steps to reduce the chances you’ll begin your workweek feeling miserable.