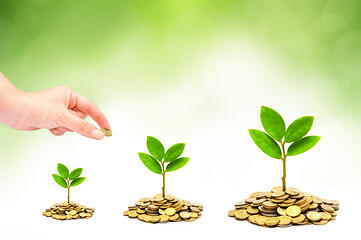 It's not shocking to learn that some people believe most others would be happy to do absolutely nothing so long as they could be paid for it. But is that true?

Well … it likely is true for a few, but it’s highly doubtful for most. Just a cursory look around will reveal the myriad of things—good, productive, and useful things—people will do for no pay whatsoever.

In fact, a LinkedIn study found that a primary reason people leave jobs is in pursuit of growth opportunities. And a study by Jobvite uncovered that 50% of employees view their current job as a “placeholder” and that younger employees in particular believe their jobs are temporary development opportunities. It’s not much of a leap to conclude from these studies that greater chances for advancement lead to greater employee retention.

In 1943, Abraham Maslow introduced his hierarchy of human needs model, which has since been adapted and reworked into numerous other models of human motivation.

One derivation looks at the four core human needs—physical (renewal), emotional (value), mental (focus), and spiritual (purpose)—and applies them to the workplace. Our mental and spiritual needs, in particular, point to the importance of intellectual stimulation and growth at work.

Think about it like this: Work is a fundamental human activity. Whether negotiating in the boardroom or weeding in the garden, we humans are driven to work. And if finding meaning in work is a basic human need, then it’s clear why over time, the “same old same old” just won’t do. Instead, employees—especially the best employees—must be growing and learning if their companies are to retain them.

On a more practical note, advancement is the only way most employees will satisfy their earnings goals, which are essential to meeting their physical needs.

Development On The Back Burner

In "Why Employee Development Is Important, Neglected And Can Cost You Talent," author Victor Lipman makes a distinction between informal development opportunities (such as high-visibility projects and more responsibility) and formal development opportunities (such as training, mentoring, and coaching). Many employers provide the former, but far too few provide the latter. Employees, however, value and want both.

Unfortunately, none of these is a particularly good excuse for ignoring such an important area. (Lipman goes so far as to call “lack of time” lame.)

It’s true, the Great Recession of 2008 narrowed the job market and caused a significant portion of the workforce to rethink and reboot. However, workers are regaining confidence in the economy, and according to that Jobvite survey mentioned earlier, 45% of employees would take a new job that provided better compensation or more opportunity for growth despite being satisfied in their current job.

The challenge for employers, then, is to provide benefits that deliver more than surface satisfaction. Development initiatives that demonstrate a personal interest in and concern for the employee are a good start.

Development Doesn’t Have To Be Costly

As Lipman points out, development efforts don’t have to be costly or unduly time-consuming. He writes:

“At its core [employee development] is mostly a matter of good managers taking the person-to-person time to understand their employees… recognizing their skills and needs… and guiding them to fill in the gaps.”

When you consider the costs of not developing employees—diminished engagement, loyalty, innovation, and retention—against the gains these efforts provide, it’s easy to make the case for the investment.