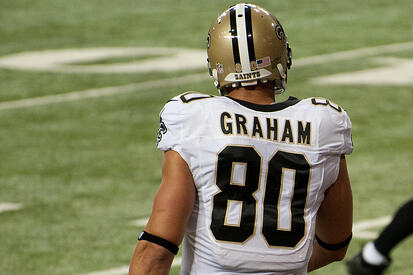 And you thought the Super Bowl was exciting.

The first week of NFL free agency has offered some surprises, to say the least. The St. Louis Rams and the Philadelphia Eagles trading quarterbacks. The New Orleans Saints’ star tight end, Jimmy Graham, heading to the Seattle Seahawks. It seems like playmakers from every division are flying across the map.

We all dream of landing game-changing talent, whether or not it makes the headlines. Here are three recruitment strategies we can steal from the NFL.
Gotta Catch ‘Em All

Swapping quarterback Nick Foles for the Rams’ Sam Bradford isn’t the only roster shake-up from the Eagles. Head coach Chip Kelly has made big moves at the running back position: First, Kelly traded away starter LeSean McCoy to the Buffalo Bills. Then it looked like he was about to sign the San Francisco 49ers’ Frank Gore — until Gore went to the Indianapolis Colts. Then he signed the San Diego Chargers’ Ryan Mathews. And then he pulled off a bit of a coup and won the Dallas Cowboys’ DeMarco Murray as well.

All that wheeling and dealing has paid off, though — the 2015 Eagles will be equipped with two new powerhouses, plus current running back Darren Sproles.

The lesson: Sometimes going all-in is the only way to get the talent you need. Great candidates are in high demand — don’t pin all your hopes and plans on one option, or you’ll be left in the lurch if (or when) someone else beats you out.

Worth More Than Gold

Let’s take a closer look at the signing of DeMarco Murray. The 2014 Offensive Player of the Year led the NFL in rushing yards. And he’d already turned down a four-year, $16 million-dollar extension from the Cowboys.

“I thought he would be out of our price range,” Kelly said.

But money isn’t the only thing that talks. Though Murray said that the Eagles’ offer “definitely wasn’t the biggest contract,” he still chose them because “there was something about this organization that caught my eye.”

And what was that something? “I felt this was a great opportunity for me to win the Super Bowl at the end of the day.”

The lesson: Many top candidates aren’t just looking for the biggest dollar signs. They want to be a part of a team that’s on the path for success, that will help them reach career goals and not just pad their bank account. Show them that your company is on the right track, and they’ll get on board.

Technically, Jimmy Graham didn’t choose to go to the Seahawks. He was traded to them by the New Orleans Saints, so it wasn’t up to him to say yes or no.

But as well all know, joining an organization is a process, not a single action. A new hire has to commit to the team and become a part of the culture. Without that, you’re looking at either a swift exit or — possibly worse — an employee who is physically present but not engaged.

So how do you win over your new talent? Let’s see what Graham said.

Of head coach Pete Carroll: “He knew so much about me [...] That really means something, really to anybody, that he would take the time to really learn all of these individual things about me.”

The lesson: Speak to your candidates as individuals. If you’re asking them to be more than just a cog in the machine for your company, you have to treat them accordingly.

Of the organizational culture: “[T]he first thing I noticed was how close they were as an entire unit. [...] When their offense is on the field, their defensive guys are right there screaming and yelling — literally being fans for their offense. And when their defense is out there, their offensive guys are doing the same thing. It just seems like they have a culture there that breeds a brotherhood [...] it's not about individual anything.”

The lesson: Recruiting isn’t just about you — it’s also about your company as a whole. Your culture needs to be appealing to get a new candidate to buy in.

So what happens when you recruit like the (NFL) pros do? You get great talent with full commitment, regardless of salary or personal glory.