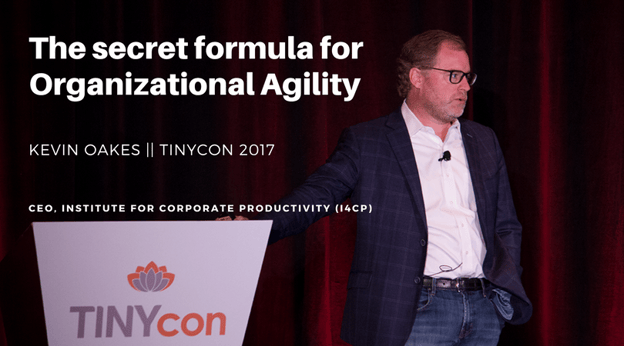 Kevin Oakes is the CEO and founder of the Institute for Corporate Productivity (i4cp), the world’s largest vendor-free network of corporations focused on improving workforce productivity. He describes i4cp as “a research group that studies the people practices of high performing organizations.”

Oakes was the Chairman & CEO of Click2learn, the first company Paul Allen founded after Microsoft, which he helped take public in the late 90’s. Kevin Oakes was also the founder of Oakes Interactive, an award-winning, technology-based training company, which he sold to Click2learn. Finally, he’s the author of The Executive Guide to Integrated Talent Management.

Oakes joined us at TINYcon 2017 to give us some of i4cp’s best insights into what people practices are shared among high-performing organizations.

Watch his excellent talk for in-depth examples and best practices, or read our key takeaways below. 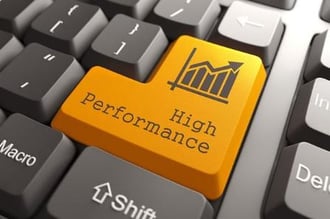 At i4cp, there are two goals that lead their research, 1) understanding what high performing companies do differently in terms of behavior, and then 2) investigating if those practices correlate with market performance more widely.

Before we can explain what it was that they found that was shared among those high-performing companies, we have to explain how they were measuring that high performance. Across the groups that they surveyed, they measured performance on four metrics: Revenue Growth, Market Share, Profitability, and Customer Satisfaction. Companies that performed well in all four fields were investigated for people practice differentiators from their low-performing counterparts.

The Shared Trait: a certain kind of corporate culture

Once i4cp knew which companies were high performing, they were able to isolate these companies to determine what the shared people practices were. What they found, unsurprisingly, was that culture made all the difference. The surprise came when they found that it was a certain kind of culture that drove these companies to excellence: one of organizational agility. 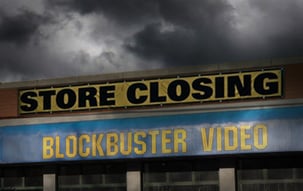 Basically, companies with a culture that made them able to pivot and adapt quickly were able to perform significantly better than their counterparts. Oakes shares an example of Blockbuster video. In 1999, an analyst report showed “investor concern over the threat of new technologies is overstated.” Obviously, the emergence of companies like Netflix and other streaming services would eventually lead to the decline of movie rentals—but Blockbuster’s own demise might have been prevented by taking the threat seriously and innovating, or by acquiring Netflix flat out early on.

By contrast, Oakes shows us a Microsoft memo from the dawn of the internet era, which is a perfect example of agility. In 1995, Microsoft launched a new operating system, windows 95. Amidst the celebration, there were also new competitors getting on the scene. At the time, Bill Gates told his team essentially, “if what you’re doing is not web enabled, stop, and do something else.” Today, Microsoft has still managed to stay in the top five most valuable companies, by adapting and staying on top of new technologies and trends.

The six dimensions of organizational agility

Agility is not a difficult concept to grasp, but implementing an agile culture is a more difficult task. I4cp found that when it came to agility, there were six shared traits which agile companies exemplified:

Those first three-- sensing change, adapting to it, and absorbing the impacts of change-- are all traits companies need just to stay afloat. It is acting on change, anticipating change, and taking advantage of it, that makes a company especially high-performing. Oakes explains, “some companies even initiate change so that they can use it as a catalyst for great ideas.” 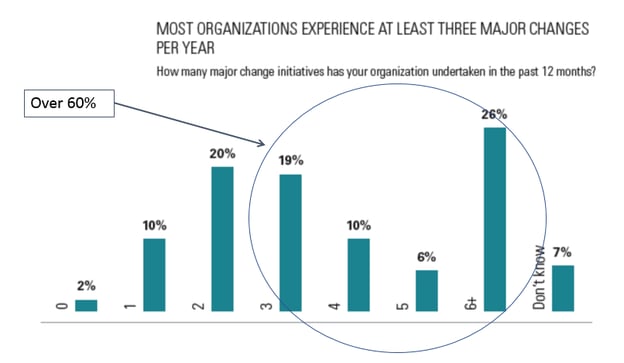 The cultural values that support agility

Being agile and embracing change is a nice thought, and probably one that most companies aspire to anyway. The final piece of the puzzle is how it’s done. Ultimately, in order to be an agile company, you have to have the right values and approach to work, across the organization. And while each of these values can hang on the wall in the office, living by them looks like a few very specific behaviors:

Innovation means trying to reduce the barriers and red-tape around creating new ideas. It also means embracing failure when an idea doesn’t work out, and taking learnings from that failure for the next approach. Companies that innovate well tend to share knowledge freely and share recognition and credit for new ideas.

Transparency can be a hard one to get leadership to act on, but it’s the high-performing agile companies that do an exceptional job of actually living by this value. That can look like sharing what the decision-making processes for leadership look like, and explaining those decisions. It also means being clear about the company goals and individual goals in place, and communicating how and when people will be measured against those.

Creativity isn’t just a value that a company should support—it’s one that companies should nurture. Providing internal training in creativity and innovation practices is still an uncommon thing for companies to do, but it’s one that the best and brightest companies are taking on. Especially since global leadership development programs actually don’t teach innovative practices and creativity, it’s a muscle that a lot of employees don’t often get the opportunity to flex.

Diversity is important not just in your demographics, but also in your thought. Oakes says, “Innovation is most likely to occur when there is diversity of thought and experience, as well as true familiarity with the issues needing to be addressed. It is not just about having a new idea, but sharing it, thinking it through, and accepting challenge.” If everyone on the team is thinking the same way, you’re unlikely to notice the inconsistencies or flaws in your game plan.

Collaboration isn’t actually about knowledge sharing or structural harmony—it is about using existing knowledge and information to create something new. Since great innovations almost never come from the depths of one brilliant mind, but more often arise from the small actions and ideas of a team which get integrated together into something entirely new.

There are tons of ideas on where company culture comes from—if it’s from the bottom up, top down, or maybe even from middle management out. “I do think that top down [cultural change] can work, but it’s hard to change a culture very rapidly. What you really have to do is embrace aspects of the culture that you like, and support those,” says Oakes.

If you’re looking for your company to be one of the next big high-performing unicorns—privately-owned companies valued at over a billion dollars—then it’s important to make sure your behaviors, leadership, and values all support the idea of agility. Especially with technology adapting at an ever-increasing rate, and markets changing at a faster rate than ever, agility might be the only way to not only stay upright, but to ride the wave.

Kevin Oakes spoke at this year's TINYcon 2017. To reserve your tickets to next year's TINYcon, and make sure that you're keeping up to date with the latest in employee engagement and company culture, get your early bird tickets now! If you're looking for more tips or info on improving company culture, you can also read our culture report here.