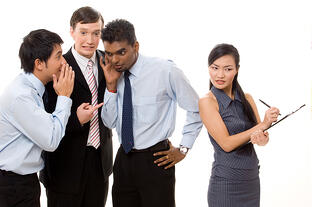 Recruiting isn’t just about your HR department or the recruiter you work with. Even people who don’t have contact with a candidate can impact their decision to join. What do the actions of your organization—and even those outside of it—tell the rest of the world about your company?

What Do People Think Of You?

The age of social media means that bad news about a company’s behavior can become very public very quickly. It can create a bad reputation that haunts an organization, with ripples that reach potential applicants. Respondents to a survey from CR Magazine and Allegis Talent2 say that what they hear about an organization affects their job decisions:

And for those who would say yes? Many of them would only accept a job at a company with a poor reputation for significantly more money:

Even once they join a company, respondents would be swayed by what others are saying:

If your company makes a poor showing in the world of public opinion, don’t be surprised if new hires jump ship—or never sign on in the first place.

What Do Applicants Think Of You?

Reputations aren’t just about splashy scandals that make headlines. They can be created from unexpected sources. You may think that a recruiter only makes an impression on the applicant they’re interacting with, but many applicants say they would share bad experiences.

Poor communication during the application process, a rude interviewer—it could all end up shared with the online world at large, free to be read by someone you might want to hire.

What Do Your Employees Think Of You?

Maybe the most important opinion of all comes from your current employees. Even though recruitment strategies have gone digital in recent years, the members of your organization are still vital in finding you new recruits. According to a CareerXroads report, employee referrals are the single most significant source of hires, right above career websites.

This means that employee engagement and satisfaction affect more than just your current company—what your people say to their friends and colleagues can shape the future of your organization. If your employees are unhappy and telling potential candidates about it, you could lose out on the talent you want to hire.

Don’t put all the responsibility on HR. A culture of employee engagement and organizational integrity, which extends to every level of the company and every step of the application process, should be part of your recruitment strategy.