5 Companies That Are Nailing Public Transparency 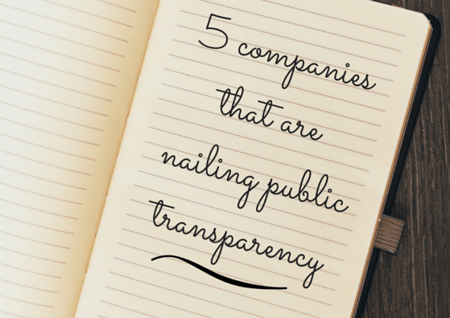 Transparency sounds great in theory. Making your company more open on everything from public revenue reports to explaining big decisions to employees sounds ideal. And our Employee Engagement Report found that employees, especially millennials, strongly value transparency and that retention and transparency are strongly linked.

But how best to accomplish transparency? It’s a delicate balance — you want to keep employees in the loop, but you also want the company to function smoothly. Here are five examples of companies that have succeeded in becoming more transparent:

Here’s a unique approach to transparency: no bosses. The leading computer game developer and digital marketplace has embraced a nonhierarchical model. “We’re a flat organization, so I don’t report to anybody and people don’t report to me,” employee DJ Powers told the BBC. When one employee asks a colleague what they’re working on, it’s different than having a manager ask. No one’s “checking up on you,” instead they’re interested in having a productive conversation.

The company has embraced this vision since its start in 1996. While this approach might not work for every business, Valve now has more than 300 employees and a net worth estimated between $2 billion and $4 billion, according to Forbes.

This web marketer developed Inside Unbounce, a “staff-written un-curated window into our journey, and the lessons learned along the way.” The goal of this blog is to provide insight into the company for potential employees and customers while also providing a way for employees to interact with one another. It’s proved to be more than an average blog, creating a “content culture” that’s a big part of the company’s identity.

Branding consultancy Percolate works with some of the biggest names in business, like AmEx and GE. The company believes in keeping it simple when it comes to transparency — rule number one is to talk to each other, according to their blog. Weekly meetings involve the entire team presenting their goals and reflecting on how they did the week before. They also value clear communication, so they use everyday language and avoid technical jargon.

Red Hat created “memo-list” in an effort to make communication between employees more open. This social media tool is used for everything from discussing strategy to sharing jokes. According to the company, memo-list is representative of its meritocratic culture “because it gives every employee an equal opportunity and equal voice to express thoughts, ideas, and opinions.”

This is part of the company’s effort to make ideas more powerful than titles. Often memo-list serves as a way to vet ideas, allowing the best to rise to the top. The open-source technology company has recruited big-name clients like Sprint, Adobe, and Casio.

This social media company has shined light on its finances, keeping employees in the loop about what the company is doing and how successful it is. This started with releasing revenue figures on their website. Since then, they’ve released employee salaries and detailed where the customer’s money goes.

Joel Gascoigne, cofounder of Buffer told Entrepreneur, “The top benefit we’ve seen is that being transparent has increased the level of trust both between team members and also with our customers.”

Oct 17, 2016 3 min read
The Arguments for and Against CEO Compensation

The Arguments for and Against CEO Compensation