How to Determine If Your Employee Has Leadership Potential When a managerial position opens up at your organization, are you more likely to hire someone who’s never worked for your company? Or do you look internally to see whether there’s anyone who has the talents and soft skills needed to succeed in an authoritative role?

If you hire externally, you may want to reconsider.

For starters, a recent study revealed that those hired outside of the organization got paid an average of 18% more than those promoted internally. What’s more, external managerial hires were 61% more likely to get fired from their new positions.

Since it doesn’t really make sense to pay someone who’s unlikely to work out more money when you can promote someone internally and pay them less, managers should always be on the lookout for employees who have leadership potential. That way, when new senior positions open up, they can promptly be filled by a current employee.

But how exactly do you know which of your employees are likely to make good leaders? Keep your eyes open for workers who possess these nine traits (or at least a majority of them):

01. They know exactly what to do without you telling them

Some of your employees need to be regularly reminded about what they need to be doing. Others seem to do everything perfectly, to the point that you don’t even think twice about whether they’re on the right page. Employees who fall into the latter group may very well be your organization’s next leaders. They’re either really good at following directions or have an innate understanding of the right way to do things.

02. They are quick to lend their coworkers a helping hand

Employees who make great managers support the folks they work with and don’t hesitate to pick up the slack for them when time allows. If one of the members of your team is consistently helping their peers tackle their workloads, they may very well be managerial material.

03. They volunteer to take on additional responsibilities

From time to time, projects pop up at every organization that fall outside the scope of everyone’s workload. Maybe you’re running a special promotion and need to generate a ton of content — emails, blogs, and social media postings — to get the word out. If a certain employee volunteers to add more things to their plate on a regular basis, that person probably has leadership potential. You can’t expect that all of your employees will be able to produce great work all of the time. Some workers need more help than others. Yet on the other end of the spectrum, some people seem to almost have superpowers and can deliver above and beyond on practically everything they do. When an employee produces amazing work time and time again, they may very well be destined to climb the company ladder.

05. They influence those around them

Successful managers command the respect and attention of the employees they oversee. To that end, your employees who have leadership potential are likely already influencing the people they work with. While it’s certainly possible to figure out which employees are influencing their coworkers the most from your own observations, it never hurts to have the data to back up your instincts. The more connected a person is at work, the more influence they have among their peers.

06. They think outside the box

Great leaders have the ability not only to manage other people but also to come up with exciting new ideas that help the company meet its goals and make it to the next level. It’s virtually impossible for any company to thrive forever if it never innovates or introduces new products or services. Does one of your employees come up with killer ideas at regular intervals? Do they never hesitate to show initiative and brainstorm even when they’re not asked to do so? That person should probably be considered for the next promotion that opens up.

07. They manage their coworkers to some degree already

Anyone who’s ever worked in a team setting before knows that there are usually one or two go-to colleagues that you approach with any question or concern. For some reason, these folks just command authority and their coworkers aren’t intimidated to ask them for help. To a certain extent, your organization’s leaders of tomorrow may already be running the show — albeit on a much smaller scale. Great managers are born leaders who naturally exude authority and expertise.

08. They have a great temperament

The most talented worker in the world isn’t suited to be a leader if they are constantly losing their temper, yelling at their colleagues, or being extremely negative about new developments at the company. Great leaders, on the other hand, are calm, cool, and collected at all times. Their colleagues love them because they’re always in a friendly and approachable mood. If a member of your team gets along with everyone else — even the person that most people like the least — they may make an exceptional leader.

Even if one of your employees has all of the qualities listed above, they might not want to be a manager. Some people just simply don’t want the extra responsibility and are content in their current roles. Great leaders are interested in taking on more responsibility. If any of your employees has been telling you for a while that they have their sights set on becoming a manager, keep your eye on them and start thinking about whether you could picture them in a leadership role.

When employees see that you’re promoting their deserving peers into managerial positions, they’ll start believing that, sooner or later, a promotion might come their way too. Fill senior positions with your most talented workers, and employee engagement should improve across your organization. 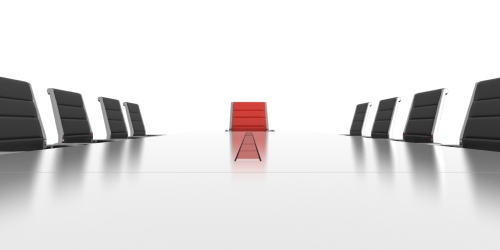 Apr 9, 2015 2 min read
How One CEO Inspires His Employees Weekly How One CEO Inspires His Employees Weekly

Nov 17, 2016 1 min read
How to Improve Low Employee Morale When Working from Home

How to Improve Low Employee Morale When Working from Home