The following is the first email I sent to the entire company on March 1st, 2020 regarding the Coronavirus / COVID-19 situation in Seattle, WA where TINYpulse is headquartered and the epicenter of the US outbreak. I've included the email in its entirety below. 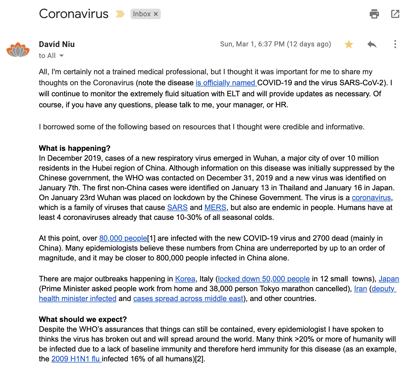 All, I'm certainly not a trained medical professional, but I thought it was important for me to share my thoughts on the Coronavirus (note the disease is officially named COVID-19 and the virus SARS-CoV-2).

I will continue to monitor the extremely fluid situation with ELT and will provide updates as necessary. Of course, if you have any questions, please talk to me, your manager, or HR. I borrowed some of the following based on resources that I thought were credible and informative.

In December 2019, cases of a new respiratory virus emerged in Wuhan, a major city of over 10 million residents in the Hubei region of China.

Although information on this disease was initially suppressed by the Chinese government, the WHO was contacted on December 31, 2019 and a new virus was identified on January 7th.

The first non-China cases were identified on January 13 in Thailand and January 16 in Japan. On January 23rd Wuhan was placed on lockdown by the Chinese Government.

The virus is a coronavirus, which is a family of viruses that cause SARS and MERS, but also are endemic in people. Humans have at least 4 coronaviruses already that cause 10-30% of all seasonal colds.

At this point, over 80,000 people[1] are infected with the new COVID-19 virus and 2700 dead (mainly in China). Many epidemiologists believe these numbers from China are underreported by up to an order of magnitude, and it may be closer to 800,000 people infected in China alone.

What should we expect?

Despite the WHO’s assurances that things can still be contained, every epidemiologist I have spoken to thinks the virus has broken out and will spread around the world.

Many think >20% or more of humanity will be infected due to a lack of baseline immunity and therefore herd immunity for this disease (as an example, the 2009 H1N1 flu infected 16% of all humans)[2].

Data on the virus is quite preliminary. So far the following appears to be true (you can also play with primary data here):

In general, much of the western world’s policy to COVID-19 appears to be one of delaying arrival of the disease. In particular, delay the disease so that:

What should we do at TINYpulse?

As I mentioned, I want to be as transparent as possible on this fluid situation. Please reach out to me, your manager, or HR if you do have any followup questions / comments. Thanks!