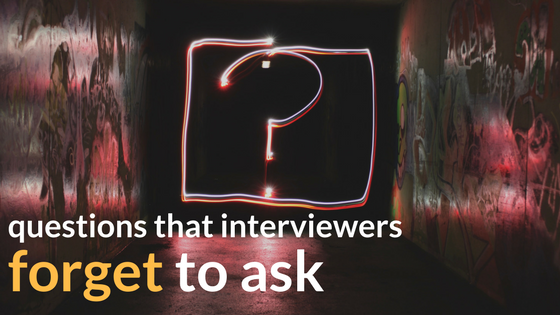 At TINYpulse, we often write about interview questions that can help hiring managers pinpoint candidates with high talent potential as well as questions that interviewers should avoid asking in the first place.

This time around we’re focusing on five of the more common questions that interviewers forget to ask altogether.

Depending on your organization and the job position, you may not want to ask all of these questions to every applicant. A candidate just out of college, for example, probably doesn’t have a previous employer.

In any case, here are five questions that interviewers often forget to ask. Find out the answers to them to increase the chances you make the right hiring decisions.

01. How was your commute to the office?

Over time, long commutes make employees miserable. Recent research revealed that those who have long commutes are less happy and have more anxiety than their peers who live close to their offices. In fact, long commutes are so bad that 33% of US professionals admit they consider quitting their jobs because of them, according to a study by Regus.

Ask prospective employees what their commute was like to the office to gauge whether they’ll be able to withstand the trip five days a week. The last thing you want is to hire someone who will get burned out by their commute and bring their negative attitude to work.

This is not to say you should reject all applicants who have long commutes. Some people even enjoy long commutes because they use the time productively (e.g., tackling freelance work or reading).

Asking job seekers a specific question about how they would deal with a challenge at work can help interviewers determine that individual’s problem-solving abilities. If you’re hiring a salesperson, ask what they would do if their team was unable to meet its goal for a quarter. This is kind of question gives interviewers insight into how a prospective candidate’s brain works as well as how resourceful they are.

03. What’s the thing you liked least about your previous company?

You don’t want to hire someone who’s going to bad-mouth your organization the moment they move on to their next job. Asking a candidate what they liked least about their last company (or current one) should help you determine how they might talk about your organization in the future.

If a candidate says they didn’t like the fact that their previous employer hired managers externally without ever promoting someone from within, that’s a perfectly acceptable answer. If they say that they think their CEO is a no-talent jerk, you may want to look elsewhere (even if it’s true).

04. Is there anything you haven’t gotten the chance to talk about that you think we should know?

Even when a candidate has something on their mind they planned on saying during their interview, the conversation doesn’t always organically evolve to the point where they can get it in.

You never know when a candidate might have an idea, anecdote, or connection that, once revealed, transforms the way you think about them. Give all job seekers the chance to relay any important information they might have left out during the interview. Sooner or later, someone will say something that will blow your mind (or at least make you reconsider their candidacy).

05. If you aren’t offered this job, what will you do next?

Would you prefer hiring someone who put all their eggs in one basket expecting a job at your company? Or would you choose the candidate that has multiple contingency plans?

Even if they ace the interview, ask candidates what they would do in the event they were not offered the job. It’s a great way to find out whether a job seeker plans ahead and if they’re confident in their candidacy. May 9, 2017 3 min read
Everything You Need to Know About Employee Relocation Everything You Need to Know About Employee Relocation