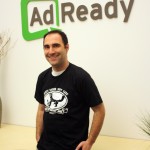 Every leader wants to improve their organization or team's culture. They know that they have to collect feedback and continuously monitor the pulse of their employees since culture is organic and constantly evolving.

But after they've collected the golden feedback from employees by talking to them, by using a survey tool like Survey Monkey, or by using TINYpulse, they are often looking for ideas on how best to share the feedback back to spark positive change. Many executives have been asking me how other TINYpulse clients are sharing, so I've outlined six different ways. Of course, this is sharing via TINYpulse, but it is applicable to any other employee or HR feedback that a manager collects. 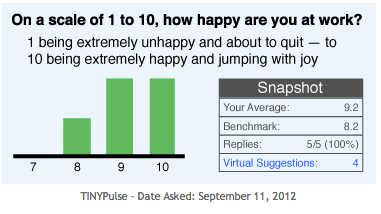 1. Share Inside Out. Peter Chee, CEO of thinkspace, is one of the most humble and transparent leaders I know. Once he measured how happy his employees were internally, he actually took a screenshot and blogged about the results for the rest of the world to see. This shows his commitment to his current team and also future team members that he is dedicated to continually monitoring and improving his company culture. He not only talks the talk, but he walks the walk.

2. Incorporate into Company Goals. There are few better ways to motivate than to link a discrete metric to a person's performance. At Beyond Home, Kevin Maude, the CEO, saw how impactful anonymous responses to the, "From a scale of 1 to 10, how happy are you at work?" question was so he baked it into his management team's goals. This question is asked on a monthly basis, which establishes trending on employee happiness so he can see if the changes they're making is having an effect. Their goal is to meet or exceed an 8.5 Happiness Score.

3. Email Results to Team. Since his company's employees invest the time to respond to the TINYpulse employee surveys, James Wong, CEO of Avidian, takes the time to read each and every comment. He then emails the results back to the team to spark further discussion for improvement. James also takes the time to highlight individuals who were recognized via TINYpulse's Cheers for Peers feature. As you can imagine, Cheers for Peers recognition is one of the most popular features since it enables anyone to recognize anyone else within the company.

4. Bake into Company Meetings. Forest Key, CEO of buuteeq, invited me over to his weekly, Friday all team meeting a few months ago. One of the agenda items for the weekly meeting is the TINYpulse employee survey responses. He projects everything and points out how buuteeq scored for that week's question versus the benchmark.

In addition, one leadership trait that I really admire about Forest is that he runs towards issues. During the meeting I attended, there was feedback about compensation. Forest read the feedback, responded with candor to the team, and then asked for further questions. He defused the potential issue before it mushroomed into gossip. By maintaining a weekly rhythm, Forest is able to consistently keep a pulse on the health of his company.

5. Oldie but Goodie Print Outs. Peter Vogel, CEO of Plink, relayed that he shares the TINYpulse results via emails. But he also prints out copies to put in the break room. So when people are meeting up, getting coffee, or taking a break, they can see what he sees as CEO. I've heard over and over from employees how empowering it is to be able to not only see your results but also the results of other colleagues. It goes a long way to affirm company improvements or areas that still need to be enhanced. This old fashioned approach definitely catches the eye and attention when the anonymous responses are publicly displayed.

6. Team Approach. Aaron Averbuch of AdReady invited me to one of his companies all hands meetings to observe how they share TINYpulse employee feedback. What was interesting from the start is that Aaron wasn't running that portion of the meeting. Instead, he rotates it amongst employees to lead the sharing and identifying of kudos, trends, and areas of improvement. The room was definitely lively with laughter, joking, and energy as this meeting's leader walked their colleagues through the results. Since everyone contributes to a workplace's culture, I thought it was brilliant to decentralize and let different people lead the discussion on how the company culture is doing and where they can improve.

Conclusion. At the end of the day, there is no silver bullet or finish line. Measuring and improving an organization's culture is an ongoing commitment and a series of positive changes. This attitude towards positive change only flourishes when leaders are willing to share the anonymous feedback back with the team to engage them for solutions.

*Written by David Niu. Follow more stories @TINYhr on Twitter to get the latest insights and best practices from entrepreneurs around leadership, culture, and people management.

The CEO's Guide to Using Pulsing Surveys to Crush the Competition The CEO's Guide to Using Pulsing Surveys to Crush the Competition 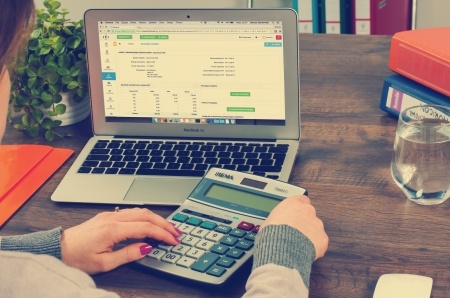 Why CEOs Need to Provide Millennials Financial Benefits and Security

Jul 15, 2016 2 min read
The First Perks CEOs Would Choose for Their New Company

The First Perks CEOs Would Choose for Their New Company