David Hajdu's first job was at 14, mowing lawns. His second job was at McDonald's. What he learned from these two experiences is that working for someone else "sucked." So at an early age, David knew that he'd likely be working for himself down the road.

Many years later, David Hajdu went to Vietnam to help a friend with a software development project. He became enamored with the opportunities that Vietnam offered, especially as a potential software outsourcing base. At the same time, David's good friend, Benjamin "Ahn Ahn" Liu, was doing software consulting in the U.S. So they decided to combine forces and started VinaSource in January 2007. 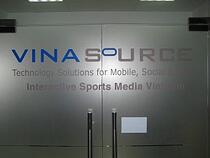 (1) Processes - David believes that people come and go, especially since the turnover rate is so high in Vietnam. But during the last five years, VinaSource has developed better and better processes to mitigate the high turnover rate. This includes a better interview process, onboarding process, training processes, and review processes, etc.

(2) People - VinaSource has a strong team. In particular, their managers speak impeccable English. These managers communicate effectively externally with clients and internally with staff members. David has invested heavily in training and mentoring these managers along with the entire company.

(3) Customers - Surprisingly, VinaSource has conducted zero sales and marketing. All their customers come via referral, which speaks volumes about the good work they do. In fact, David says that their customers are a great source of referrals since these customers' CTO's and executives will refer friends and other contacts who've had poor prior experiences with outsourcing.

Since David Hajdu is an American building VinaSource in Saigon for the past five years, he's definitely had his share of missteps and wins. He shares the following experiences and guidance for other entrepreneurs:

*Hire HR Person Earlier - David Hajdu hired his first HR person when VinaSource grew to 35 employees. In hindsight, he would have hired someone when the company was around 10-15 employees because their current HR person's responsibilities include much more than a traditional HR role. For example, in Vietnam, employees are really into events, such as team lunches, parties, and outings. These have a very positive effect on company culture, cohesion, and retention. She helps David coordinate all these events along with performing more traditional HR tasks. Hiring earlier and implementing more of these corporate events would have definitely helped build the company culture and improved retention when VinaSource was building out its staff. 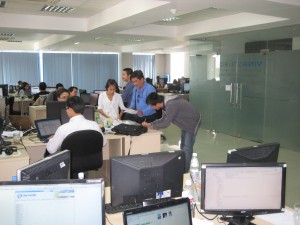 *New Hire Integration Process - David realized that if a new employee worked past their one-month anniversary, they would most likely stick around. He designated the first month as the "danger zone" since many new hires were coming onboard and then quitting abruptly. He knew he had to redesign the entire new hire process.

Now when a candidate interviews, they'll immediately receive a packet with a VinaSource pen and folder with the company's vision, mission, and cultural values inside. If they make an offer to a candidate, they'll always schedule an in-person meeting over coffee to review the offer.

After a candidate joins VinaSource, on their first day, they have a very specific agenda. For example, they'll ensure that the new staff member meets with every member of their team, they go out to lunch as a team, they'll review the company's vision and culture, dive into the software tools VinaSource uses, and also receive a company T-shirt. By redesigning the new hire integration process, the onboarding process is much smoother and has dramatically increased retention for new hires.

*Leverage Surveys - VinaSource conducts internal surveys at least once a quarter with about 10 - 15 questions per survey. According to David, Vietnamese employees are more reticent to provide frank feedback, so he uses these surveys to extract their thoughts. Finally, he also surveys his customers after every project. He wants to make sure that VinaSource is delivering happiness to them, and that they are more than satisfied. 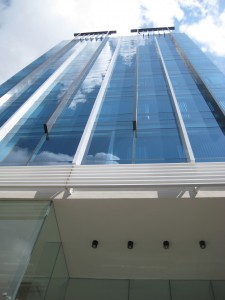 *Localized Learnings - As a foreigner running a business in Vietnam, David Hajdu has definitely experienced his share of highs and lows. Throughout the process he's learned a tremendous amount and adapted his Western-leaning management and leadership style to Vietnam. He shared the following insights:

(a) Perception Matters - David Hajdu was used to working in spartan startup environments in the U.S. and carried over that frugal mentality to Vietnam. In fact, his first office in Saigon also doubled as his residency and company cafeteria too. Today, they've moved into a fabulous, new building with a much better "address." He discovered that not only do his employees enjoy the extra "face" they receive when handing out there business cards, but even his employees' families are more boastful and happy.

(b) Individual to Collective Bonus - After VinaSource hit a goal, David gave everyone in the office a working day off. He thought that people would relax at home or run errands. Instead, when he logged onto Facebook the next day, he discovered that they all hung out together on their bonus off day. So now instead of a extra day off, VinaSource will schedule a company outing instead. 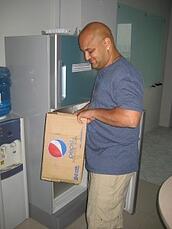 (c) Title Structure - In the U.S., there's a lot of title inflation that David didn't care for. He just cared that people got their work done on time. He learned that in Vietnam, they were much more sensitive and attuned to their title. So David undertook an initiative to formally outline everyone's title and to introduce clear promotion paths.

(d) Free Food and Drinks - In most startups and technology companies in the U.S., they'll offer free sodas and food to encourage people to stay and work longer. David has incorporated this into VinaSource. They offer free sodas, beers, and lunch on Friday. These perks are just as effective in Vietnam as in the U.S.

*Delivering Happiness - When David Hajdu first read Delivering Happiness by Zappos' Tony Hsieh, he was so inspired that he had his management team read it too. After they all read the book, they collectively changed VinaSource's mission to "Deliver happiness to clients and the team." Consequently, they try to relax and have more fun at work, which David notes is much different than the standard, rigid Vietnamese company. He's introduced a popular fooseball table at work recently too. 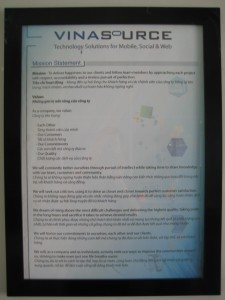 But he balances this with a higher level of accountability for each staff member. To illustrate, VinaSource provides free English lessons to the staff, and they will even play Pictionary, which is a fun way to learn English vocabulary. Yet the company also administers tests to see if the employee's English is actually improving which holds them accountable. And to ensure that they are delivering happiness to clients, David sends out surveys after every project to hold the project team accountable to their stated company mission.

*"Hit and Run" Initiative Overload - As many entrepreneurs know, they often read a book, go to a conference, or get inspired and then unleash a wrath of initiatives to improve their business. David Hajdu used to do this at VinaSource and describes it as a "hit and run" management style. Today, David's mind still brims with ideas and initiatives, but he now limits how many initiatives are ongoing to a maximum of two - one that can be spearheaded by him and one that can be spearheaded by Ahn Ahn Liu. This has resulted in more company buy-in, change, and results. David's experience serves as a reminder that eager entrepreneurs need to let off on the gas sometimes and tap the brakes when it comes to initiatives.

*Effective Reviews - David has created the most comprehensive and dynamic review processes that I've come across so far. It's quite detailed, so I'm breaking it down to the three main components:

(a) Monthly Reviews - Each team member who is working on a client project receives a monthly review that has a bonus attached to it. First, the project will receive a rating that applies to the entire project team. Second, the individual will also receive a personal rating. Third, the manager will also assign an overall project / progress rating. Fourth, they add customer survey feedback and incorporate this into the review too. Everything is graded on an 1 to 5 scale. In order to receive the bonus, the overall grade for the individual must average 4 or higher. VinaSource doesn't maintain a strict policy on relating bonuses to each employee's aggregate score, but they do impose a strict policy that if utilization falls below 60% then there are no bonuses.

David Hajdu implemented monthly reviews because he realized that his team needed immediate feedback to improve. He tried many review formats before evolving into the system that VinaSource has today. The review format is very effective for them because it satisfies the need for immediate feedback plus ties a bonus that can be up to 20% of their salary, which is very meaningful. Because the bonus is so significant, his staff has become very focused on improving their ratings and on pro-actively seeking feedback when they fall short. David welcomes and enjoys these conversations because he can now share his perspective and help employees understand how and where they need to improve.

(b) Semi-Annual Review - These reviews affect bonuses and in rare cases are also an opportunity for promotions. This review is less project focused and more development focused.

*Conclusion - As our interview concluded, I leaned over and asked David Hajdu, in hindsight, if he should have teamed up with a local, Vietnamese entrepreneur when starting VinaSource to avoid all these growing pains he's experienced. David paused for a second and then stated that he felt like he needed to make his own mistakes because a local partner would have focused on micromanaging the staff to a T instead of producing the great blend of East - West culture they've created.

As I sat back, it reminded me of David working at McDonald's (after his first job of mowing lawns) that revealed to him that working for someone else "sucked." From these experiences, I believe David has created an environment at VinaSource that doesn't "suck" but is actually empowering, fun, and meaningful to him, his staff, and his clients.