No Boundaries - Leona Watson Gets Cheeky and Candid 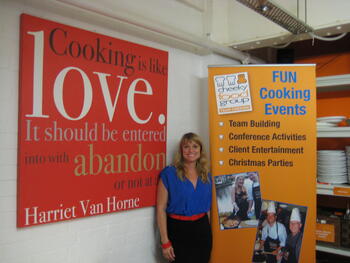 Leona Watson's first job was working as an administrative assistant in a remote Queensland mining town making $13,000 a year. She's a self-admitted poor assistant who wasn't that great at filing and typing. But she learned the value of not limiting her role and has a "no boundaries" approach. So instead of just letting her job description define her role, she took initiative and was soon doing PR and interviews on behalf of the company. And she was only 16 at the time.

About a dozen years later, Leona Watson possessed a plum gig working at Microsoft in the UK launching Windows NT. On a whim, she took a trip on a tall ship and had the 4pm to 8pm and 4am to 8am watch. While surveying the scene in a calm state of mind, Leona realized that she was in the wrong job. So even though she had a fabulous job flying around the world and was making good money, she resigned her Microsoft role at 28 to move back Australia. 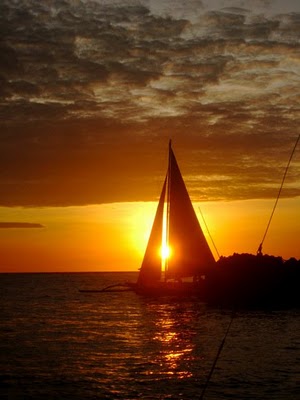 Classically, she fell in love with a sailor and ended up working on a yacht but earning only $1 an hour. Her friends and family were shocked at her decision to leave Microsoft, but she contended that if things didn't work out, she could always go back. In addition, how can you argue with working on the water, underneath a smiling sun in a bathing suit and sarong?

Part of Leona's responsibility on the boat was preparing meals for people. She loved the people interaction. So when she moved back to Sydney, she studied at Le Cordon Bleu to sharpen her culinary skills.

Around that time in 2001, Leona was approached by two other chefs to start a food company where one idea was around an innovative concept - team building through cooking - and she took the plunge and start the Cheeky Food Group. At first team building was just one part of the business, but then it became the focus. Their vision was to take the joy, fun, and interaction of cooking and to create relationships and laughter at corporate events, cooking classes, and tours. Cheeky's focus is not on a classic teacher-student relationship. Instead, they want everyone to roll up their sleeves and jump in while savoring some great wine and grooving to fun tunes. This way, a CEO can be working alongside an assistant with all the office politics going out the window. And after 50,000 happy participants, the tally has been: 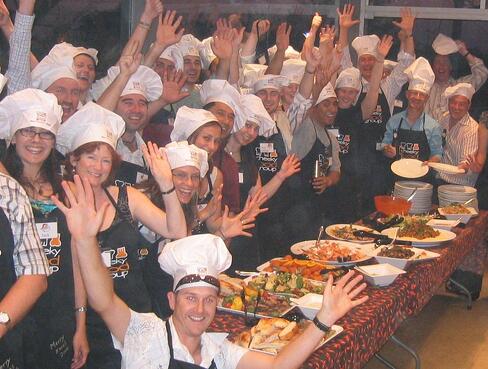 (1) Brand - this has to be embodied by everyone. From the person answering the phone to the chefs. Leona thinks they key is that even if a prospect doesn't end up buying, they should have such a strong connection to the brand that they would recommend Cheeky. Cheeky actually maintains a 100% track record of "Yes, I'd recommend you" from their clients.

(2) People - closely related to brand since they are such a people intensive / high touch company with their clients.

(3) Reputation - 60% to 70% of their business is repeat and referral business. So as Leona states, "unless we really screw up, we can keep this up with no marketing." Such a great repeat customer rate is definitely a huge asset.

So after 10 years, Leona Watson has seen her share of triumphs and learnings as she's grown Cheeky Food Group. Leona reveals the following insights and lessons for other entrepreneurs: 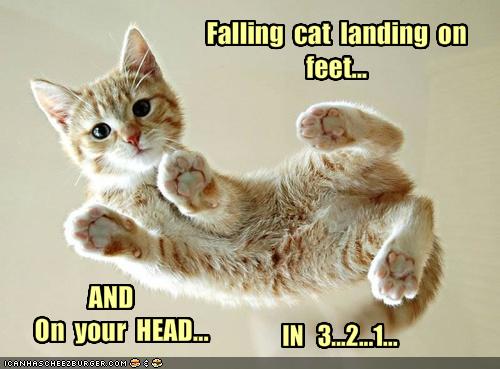 *Be a Fearless Cat- Leona Watson astonished friends by walking away from a golden role at Microsoft, yet she said the decision was quite easy. Leona relates that some people operate from a position of fear, but she refuses to. She even notes that if everything went downhill with Cheeky Food Group, she would still land on her feet and can work at a coffee shop and be OK. Leona is someone I deem a "cat." Regardless of how high the fall or turbulence, she has enough skill and tenacity to always land on her feet.

*Introspection and Improve Thyself- As the Founder of a business, it can be quite difficult to get accurate feedback to work on blindspots. Leona got into NLP for personal and business development. She discovered that she was more dictatorial and less inclusive than she thought she was. Then she hired a coach to help her work on these areas.

*Hiring Advice- Leona Watson states that every time that she made a wrong hiring decision, it was because she misjudged the applicant's people skills. She cautions to test for this especially in a small team environment. In addition, when pressed to choose between someone with a high culture fit but low skill level and someone with a low culture fit but high skill level, she said that it depends on the role and how easily she can help coach the weak areas. So there's no one size fits all answer to that question, but think about one's own strengths and weakness plus the company's values before pulling trigger.

*Start | Stop | Continue Company Reviews- Leona is also a big fan of Verne Harnish's and his start, stop, continue templates. She likes to ask her staff to come up with three bullets in each category to share. This quickly bubbles up areas for improvement and problem spots. She even took her entire team to a Verne Harnish event.

*Follow Through to Keep Momentum- After the company went to the Verne Harnish event, they were very gung ho. They had collected a lot of great action items to work on. Unfortunately, after fire was lit with the event, there wasn't enough follow through to keep the momentum. So it died a slow death. Leona has vowed to improve on this in the future and to keep the momentum going. Leona now has a stronger focus on achieving less but doing them well instead of setting Cheeky up to fail or get overextended with new ventures.

*Always Focus on People- For the past year or so, Leona admits that she's taken her eye off of the people management ball. She was experiencing challenging personal and professional issues at the time and over the past 12 months. It culminated with losing six out of nine employees. She admits that it's tough to lose so many employees in a short period of time, but it can also be a refreshing new start. In fact, in some instances a big "clean out" is the best way to go because if people can't be turned around, it's best to let them go.

*Performance Review Tips- Cheeky Food Group's performance review contains 15 to 20 questions and asks the individual to rate it from a scale of 1 to 10. Some of these questions include:

-How happy are you here?

-How much do you fit into our "Own it, do it, smash it" culture?

-How effective are you with working with other people?

*Personality Tests for All- Everyone at Cheeky Food Group takes the DISC personality assessment. Leona knows that they have a lot of "A" type personalities. Everyone is rather fiery, and that's part of their culture. But for two recent hires, she's been looking for a better complement to herself and the team with higher Influence and Compliance. Leona is a big proponent of knowing her strengths and limitations to start hiring the right team to surround herself with. 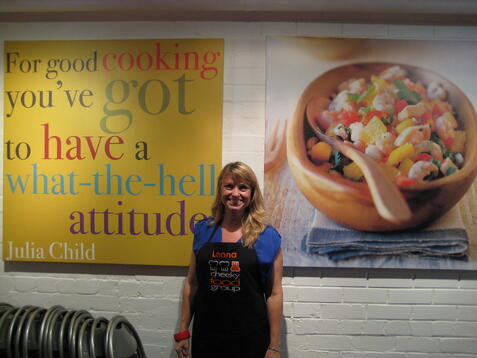 *Candid Self Evaluation- Leona Watson just started working with PWC recently. One of the first questions they asked her was what was holding the business back from growing. Leona said, "myself." It's an amazingly self-aware answer, and Leona knows that she's why the business is as successful as it is, but she's also the reason why it hasn't reached the next level yet. She wants to make sure there's another executive who can team up with her to take Cheeky Food Group to the next level.

*No Application via Email / All Voicemail Applications- When Cheeky Food Group is looking to hire staff, they always tell candidates to call a specific number and to never email a resume. The voicemail asks for basic information, what role you're applying for, why you would be good for that role, and what's your "Cheeky" X factor that you would bring. Leona says that by hearing the voice and their energy (or lack thereof) in the voicemail, she saves a tremendous amount of time and can quickly ascertain if she wants to meet the applicant usually within 30 to 60 seconds of the voicemail.

*Conclusion- At an early age, Leona Watson realized that work, and life for that matter, didn't have to have boundaries. She could take initiative, follow her heart, and devote herself to something she could be passionate about from PR to marketing to sailing to cooking. Because to her, what's the worst thing that could happen? She will always land on her feet and be able to get a job somewhere and be OK.

This refreshing attitude frees Leona, yet she's also introspective enough to know her own strengths and areas for improvement. Through this, Leona has realized that she's part of the boundary that is restraining Cheeky Food Group from even more success. And now it's up to her to help bring in the right people and get out of the way so they can smash through the boundary. Hopefully they'll quickly add to the 50,000 happy participants while maintaining the companies perfect zero ambulances and zero stitches track record. 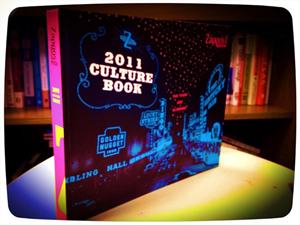 Nov 11, 2014 2 min read
How SkyMall Can Give You An Enviable Organizational Culture

Feb 4, 2015 2 min read
How These 4 Companies Became Known For Their Great Cultures 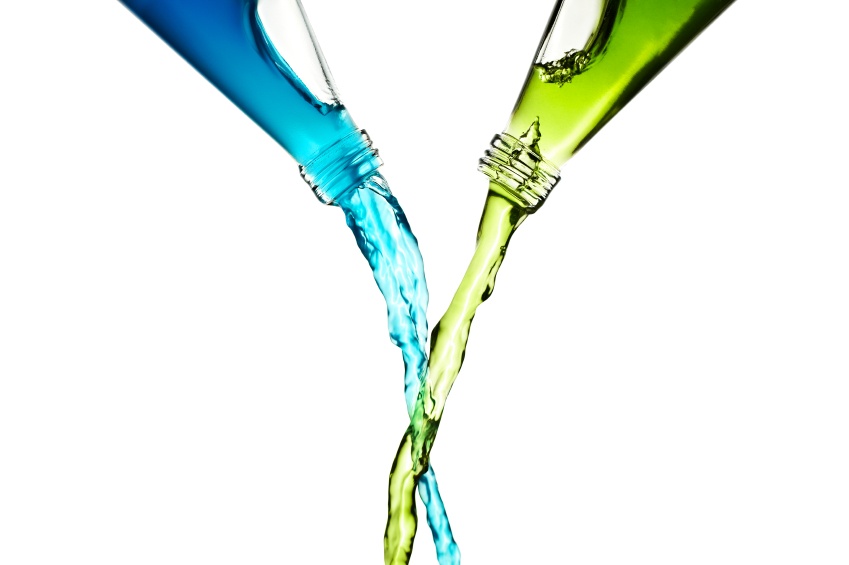 How These 4 Companies Became Known For Their Great Cultures