One of my most fun interviews so far has to be with James Wong of Avidian Technologies. James is educated as an accountant, trained as an engineer, and an entrepreneur by fire. He started his first company, an eBusiness consultancy, at 24, and sold it four and-a-half years later.

After reviewing the pros and cons of his first startup, he decided that he was "lazy" and didn't want to bill by the hour anymore like his first company. Instead, he wanted a business with leverage. So he started Avidian Technologies, a CRM software and product company with a co-founder, Tim Nguyen, in 2002.

Avidian's mission is to create an easy CRM software inside of Outlook. James observed that most people are in Outlook all day long. Who doesn't check their emails first thing in the morning and sneak in one more glance before hitting the sack? Since most salespeople spend 50% - 60% of their time in Outlook, it was an intuitive next step to create a CRM system inside of Outlook that was easy to use to spur adoption. He names it "Prophet," which is a tongue-in-cheek play off of "Outlook," but with the ability to be more accurate and see farther.

According to James, Avidian's key three strategic assets are:

(1) Product - since they are a product company. 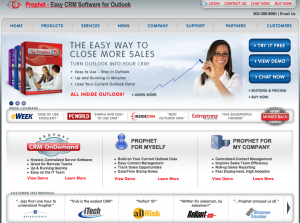 (2) Culture - they've cultivated an environment where everyone cares about each other and the client. For example, for most technology companies, it's hard to locate a phone number. But not at Avidian, where the number is everywhere on the site. When you call in during normal business hours, a real person answers the phone instead of running into a thorny phone tree. See the screenshot and number in the upper left corner.

(3) Focus - they repeatedly remind themselves that their goal is to be the QuickBooks of CRM.

Today, Avidian employs 34 "associates." He insists that they not be called employees, and that the associates leverage the five company principles to make decisions.

James shared a plethora of interesting insights on culture, HR, and performance reviews. Here's some of the best tips he shared: 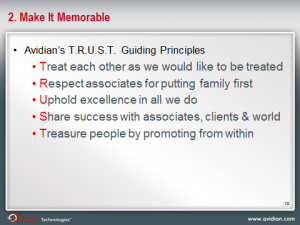 *Big on Culture and Guiding Principles - he referred to this multiple times from the beginning of the interview through to the end, so I know that he wasn't just paying lip service to it. In fact, his 5 Guiding Principles are a neat acronym - TRUST which stands for:

Treat each other as we would like to be treated

Uphold excellence in all we do

Treasure people by promoting from within

In fact, James is proud to share that he often overhears associates making decisions and invoking TRUST. Which is amazing since most businesses just pay lip service to it so employees easily nod when they hear it and forget about it just as the founders do during day-to-day operations and decisions.

*Rockerfeller Habits - James leverages the approach espoused by Verne Harnish's Mastering the Rockefeller Habits: What You Must Do to Increase the Value of Your Fast-Growth Firm

. I have to admit, that I'm quite a big fan of the Rockerfeller Habits too. Avidian uses this philosophy for annual strategic planning, monthly GMTs (goals management team meetings), and weekly and daily meetings. One key takeaway I got from the Rockerfeller Habits is that the faster your company is growing the more you need daily meetings for alignment. This may be counterintuitive since most entrepreneurs dread meetings, as they just take up dead time. But Harnish preaches if done correctly, meetings can be short, efficient, and increase overall productivity.

*Zappos based raises philosophy - he really likes this concept. Who cares if it takes someone six months or three years to master a skillset before a raise? If it's faster, why don't we provide them a raise right then and there instead of waiting for a year or some predetermined HR review period?

*Breaking bread with employees - James likes to take his associates out to lunch to just talk to them and listen. He views this as a casual, approachable way to learn what's blocking them from reaching their goals. Gone are the days when management in companies, like the GM, would have their separate executive-only dining area!

*Asks if he can provide feedback - during the interview, James brimmed with enthusiasm and excitement. He was quick to share feedback and elaborate. So when he stopped me, and said that he likes to ask associates if he can provide feedback, that made me pause to learn more. He often starts by asking, "Can I share something with you?" or "Are you open to a coaching idea from me?" Most of the time, the answer is "yes," especially with a softened start like this. But he did say that sometimes the answer is "no," and then he does keep his mouth shut.

*People are reasonable when it comes to raises - when providing compensation review, he first looks at the performance of the company. Then he'll review what the reviewees wrote about their own performance and compare it with his thoughts. Then they'll fall into a range from Exceptional to Medium to Poor (really don't have these types at the company). Then they'll talk about raises. He finds that everyone at Avidian has been reasonable with raises. And if there is someone who requests a number higher than they've budgeted for, they usually can find a way to offer that amount if the associate can hit a quantifiable goal to justify the additional increase.

*Conclusion - for all the energy that James brought throughout our interview, his parting thought was the most provoking: "Do we really need annual reviews?" Because if the reason we need them is for a compensation review, why don't we just schedule compensation reviews and do rolling performance reviews throughout the year? Or is there a way to be like Zappos to do rolling compensation reviews along with rolling performance reviews? But at the end of the day, James is an ardent believer in human capital and getting the best out of their people. He shared that he reads a tremendous amount on this subject, and similar to Marlaine of Apex Facility, I don't think we'll ever know all there is to learn about HR and managing people. I hope as I continue my TINYhr interviews, I'll get more insights from entrepreneurs around-the-world.