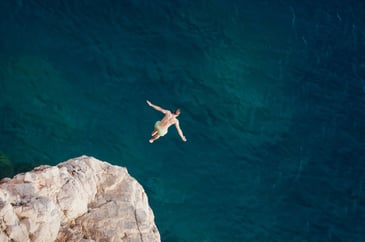 Monte Singman founded Radiance Digital Entertainment in 2005, but his lessons on leadership qualities came long before that. There are two lessons in particular that he shared with us that share a common theme: nix the self-doubt.

“If You’re Thinking About Firing Someone, You Will”

Singman’s mentor shared this advice with him 13 years ago. He said that if Monte was thinking about firing someone, then he would undoubtedly end up letting go of that person. Singman thought that that philosophy was flawed because he believed that people can change and be mentored. In fact, he took it as kind of an insult, because Singman himself had undergone tremendous personal growth over the years as a result of coaching by his bosses.

Nevertheless, after many years and many employees, Singman realized that his mentor’s saying has withstood the test of time and proven correct. Investing in improving your star players is one thing, but putting in too much time to change someone who was never a good fit is a waste of time.

Any time the truth is withheld or sugarcoated, it incurs “interest pain” — pain compounded over the length of time that the truth was hidden. There’s short-term, immediate pain from postponing the deed. The pain gets compounded by the toxicity of that person’s presence in the business — not just for others on the team, but for suppliers, vendors, and customers too. Be honest and fair with feedback, and eliminate surprises. This minimizes pain for all the parties involved.

“When the Going Gets Tough, the Tough Get Weird”

Singman heard this phrase about 20 years ago. But never knew what it meant until recently. Now he gets it. Singman explains that if you’re trying to solve a challenging problem and all the logical solutions are exhausted, then the answer requires out-of-the-box creative thinking. So if you keep bumping against a wall when dealing with a dilemma, maybe there’s a way to go over, around, or under the wall instead of repeatedly running into it.

This means opening yourself up to possibilities that might seem too bizarre or risky at first. Singman applies this philosophy by making it a point to never dismiss others’ ideas or laugh at them. He encourages and entertains all ideas because he never knows when he may need a weird solution. He believes that a work culture that ridicules or punishes people for their ideas stifles creativity. When he does hear what he — initially — considers a bad idea, he never rejects someone so harshly that it discourages them to speak up.

Don’t let doubt make you hesitate on trying an off-the-wall idea or cutting an employee who’s a bad fit. You never want to look back and say “If only I had ...”

11 Ways to Give Effective & Constructive Employee Feedback (with Examples)

5 Ways to Integrate Coaching into Your Managing Style

How Can Managers Use Survey Data to Improve Their Teams